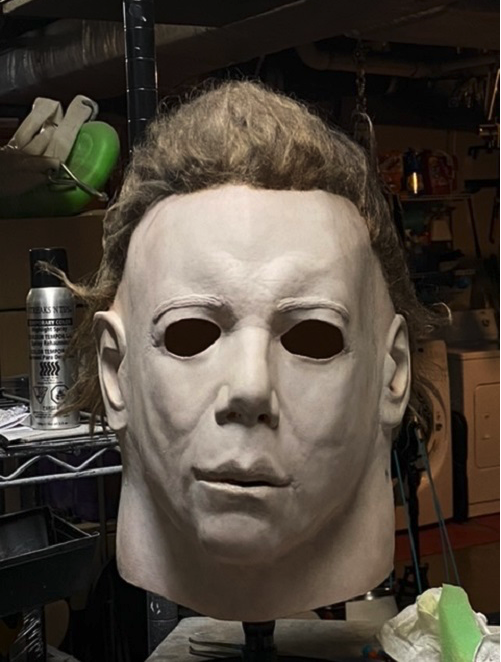 Welcome back for part two of the 8th annual top ten Myers mask replicas countdown.  In part one the masks that made the bottom half of this year’s poll were revealed, in this second and final part the top five masks will be counted down until we get to this year’s top spot.

Number Five this year is N.A.G.’s 75K mask. In 1998 Don Post Studios were giving the go ahead to release a new Shatner mask.  The common theory has been the new mask was made by laser scanning an original 1975 KIrk but I have seen compelling argument to believe it was actually created from using an old 75 Kirk production mold. Two versions of the new Shatner mask were released, one a more expensive and detailed mask and the other being aligned with what you would typically expect from a mass produced offering.  There were also a few 98 Shatner proto masks that were discovered.  These protos were superior to the two released versions as they retained all of the details of the sculpt very nicely, in effect becoming the closest thing to an original 1975 Kirk. It was from one of these Don Post 98 Shatner proto masks that the N.A.G. 75k was derived. Seen below is a 75K did up by Jimmy Falco of Spookhouse Props: 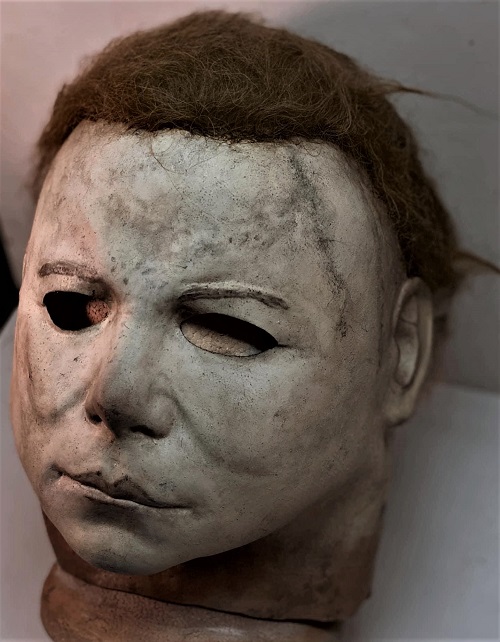 Staying at NUMBER FOUR is Nightowl’s SHAT/CREEP mask. There are two available versions of this mask, the CREEP version comes as a completely finished Michael Myers mask did up by Justin himself. With its ghastly white paint up and solid quality, this is the best option for many people who want a very nicely finished Myers replica mask ready to wear right out of the box. For those fans who would rather have the mask in a Captain Kirk form (or for those who like to send a Kirk mask to be converted into a Michael Myers by the artist of their choice) the SHAT (short for Shatner) mask is offered. Both of these masks are of excellent quality and have great detail whether you are looking for a Kirk or a Michael Myers replica mask. Justin Mabry himself not only did the sculpt but also the paint, eye cuts and hair on the copy below: 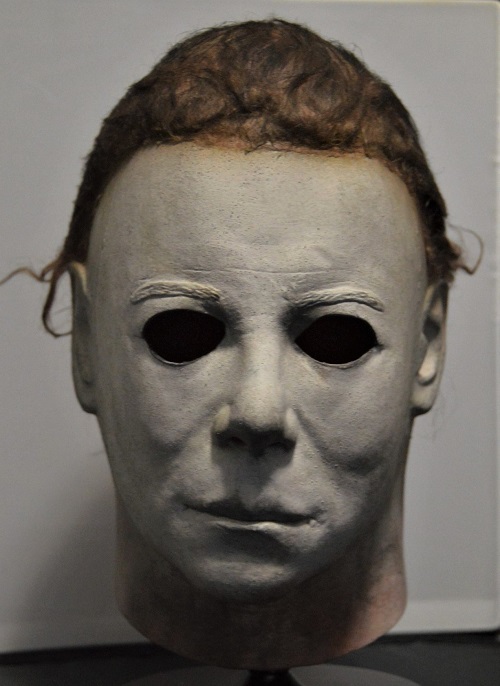 At NUMBER THREE is N.A.G.’s ’75K Castle Shape mask. To make this replica, Nick used two of his previous masks. He placed a pull of his 75k mask inside one of his H78 molds then foamed it (the foam expanded the pull) to create this uniquely shaped offspring. It is called the “Castle Shape” mask because it has a vertical stretch built into the mask to emulate the look of the hero mask when worn by Nick Castle in the original Halloween.  Freddy Loper did the customization to this one: 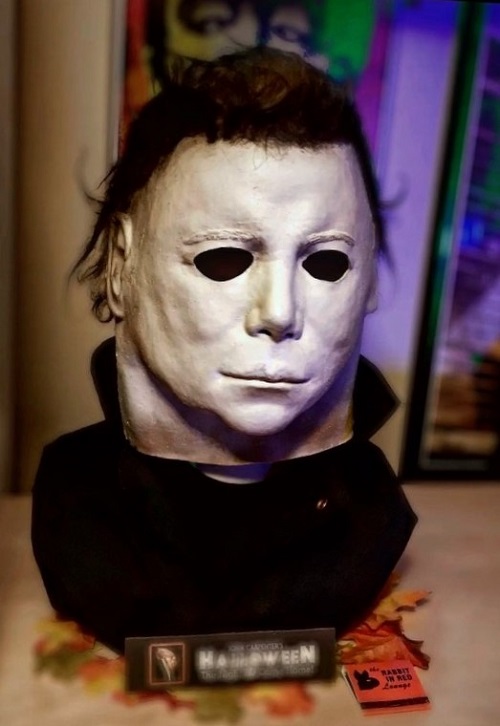 Moving up to NUMBER TWO is N.A.G.’s 98 Proto mask. In 1998 Don Post Studios apparently went back to an old 1975 Kirk production mold to make a new Shatner mask. Unfortunately the resulting run of masks produced from this project were a bit of a disappointment. However, a few proto masks surfaced and proved to be far superior in look. Two N.A.G. masks had there beginnings from one of these Don Post Kirk proto masks, the “75K” and the “98 Proto Cast”. With lineage to the hero the 98 protos have a great likeness to the Myers mask we see in the first two films.  This particular copy was finished up by Rowland Kelly: 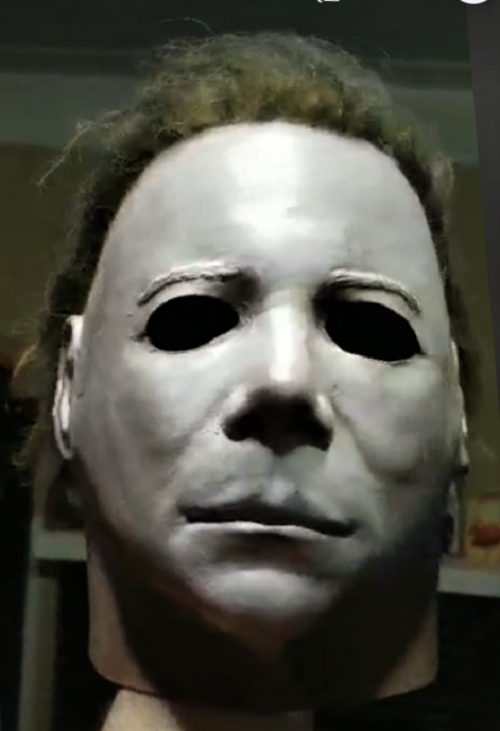 AS 2020 has been full of surprises the countdown has a little surprise of its own, this year marks the first time someone OTHER than Nik (N.A.G.) or Justin (Nightowl) has won the top spot. At NUMBER ONE is the ID mask by James Mangrum. In James’ own words:

The initial idea behind “The ID” mask came about when I came to the conclusion that all of the scenes that involved the Castle stretch were all about 95% identical. After reaching that conclusion I decided to use every angle of that Castle stretch as a reference. If my conclusions were correct, putting all of that reference together would create a very accurate representation of the hero mask being worn by Castle in ‘78. So with that said, the mask wasn’t designed to replicate any one single scene but rather a generalized Castle stretch. Considering this was my first real attempt at sculpting the hero mask, I quickly learned that any of my personal preferences or biases about its appearances had to be abandoned. Rather than trying to eyeball proportions or details, as I would in sculpting past replicas, it turned into a process of precise measurement and continuous refinement. The subtlety of the mask along with its strange ability to seemingly transform under different types of lighting made it a far more challenging replica than my previous works, such as “His Unlucky Day” and the “Son of Man.”

Well James, mission accomplished! Huge congratulations on being the winner of this year’s poll. It’s always great to see a fantastic new sculpt spark the excitement of the community and you certainly have did that very thing and did it well.  Pictured below are a few shots of member Sheriff Brackett’s proto copy: 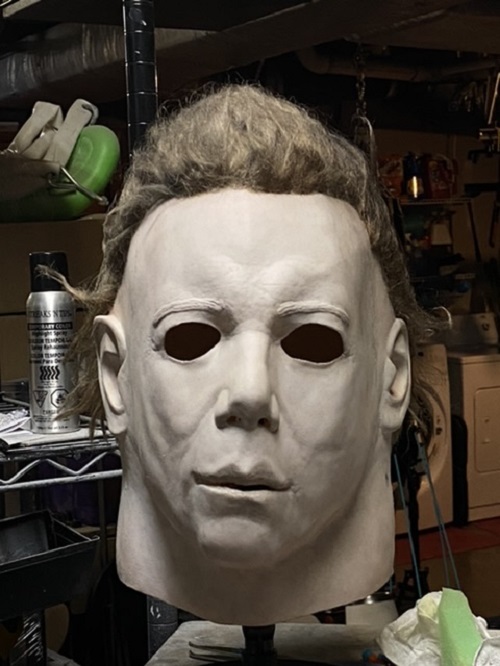 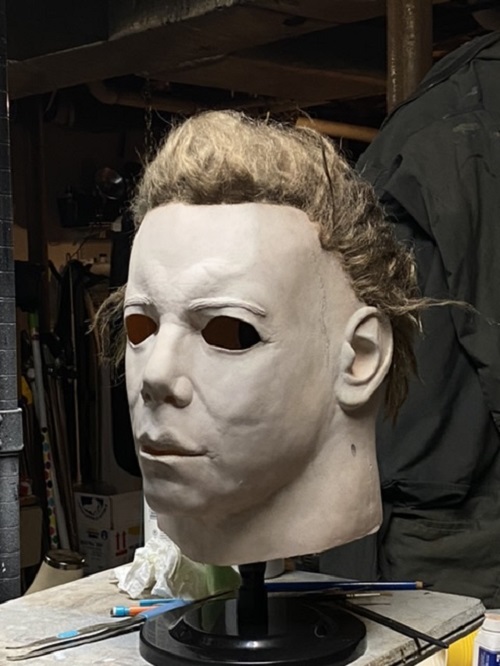 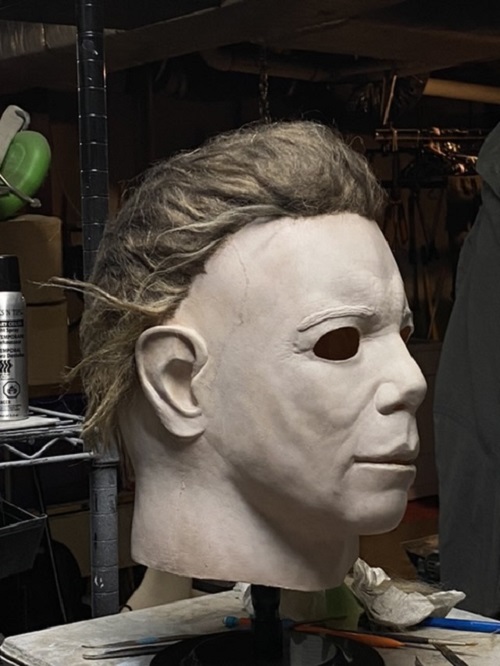 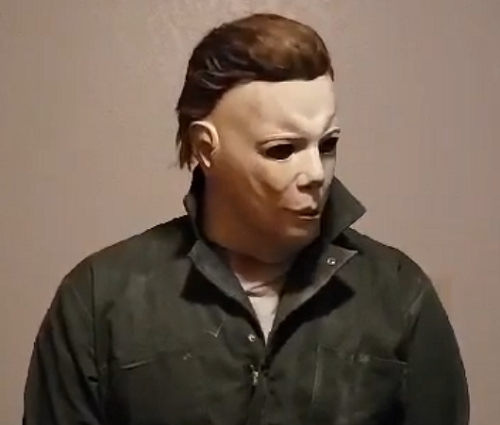 The year 2020 has been one like none of us have ever seen before. Who would have thought at this time last year that soon wearing masks in public would not only be considered normal but even ENCOURAGED? We were ahead of the curve on that one! I know that this virus has really changed all of our lives this year and it hasn’t been easy to deal with. Many things that we all love doing has either been changed in the way we can do them, been delayed or cancelled altogether. Halloween events have not been spared this fate. Yet, in the end there is still one old adage that holds very true: “life is what you make it”.

We still have a great community with some of the absolute best Halloween masks available on the planet. Halloween falls on a Saturday this year. We are getting a rare “blue moon” for Halloween AND we will be setting our clocks back one hour the next morning…giving us all an extra hour of rest after enjoying our favorite holiday. So break out those orange, green and purple lights and get the jack ‘o lanterns carved and lit. Put on your favorite Halloween movies and dress as vampires, witches, ghosts and MYERS. Enjoy this Halloween to the fullest! Thanks for being part of the Michael-Myers.Net family and for joining us in our yearly countdown. Have a fun and safe Halloween and take care of yourself and families and come back next year for our annual countdown!