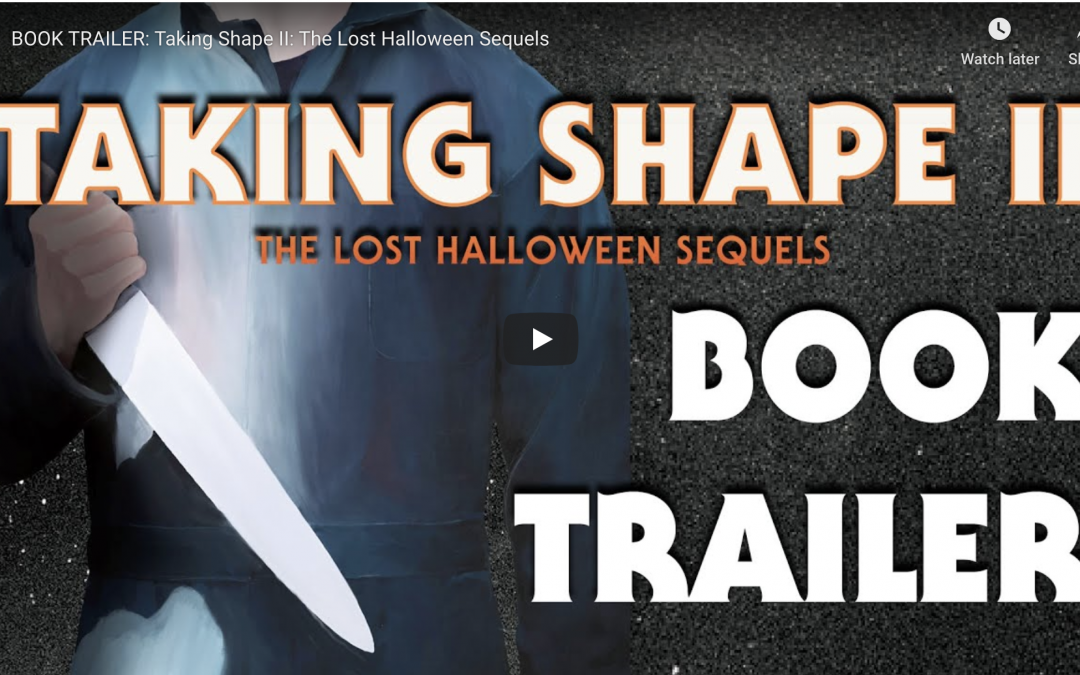 Last year, Dustin McNeill and Travis Mullins treated us with their incredibly insightful and well-done book Taking Shape: Developing Halloween From Script to Scream.  If you missed my review, you can check it out HERE.  If you did yourself a great disservice and missed out on the book, grab it HERE.

Just in time for Halloween this year, they’ve done it again!  They have released a sequel – Taking Shape II: The Lost Halloween Sequels!  I have a confession to make: I haven’t completely finished the book yet.  Give me a break – it’s absolutely massive!  I’m currently on page 364, about to find out why Halloween: The Missing Years never came to fruition.  Seriously though, don’t fly with this thing unless you’re willing to pay an overweight baggage fee.

This book couldn’t have dropped at a better time; most of us have nothing to do, seeing as the world is on fire and all.  After a long day, reclined with a glass of Woodford Reserve in-hand and a sleeping cat next to me, I tore into this sucker.  What better way to forget one’s troubles than to be immersed in previously unreleased material relating to our favorite film series?

Right off the bat, just skimming through, it will be clear to you that there’s a ton of eye candy to supplement the text.  Scans of flyers and production artifacts as well as rare photos from conventions and amusing illustrations break the pages up nicely.  As with the first book, it’s immediately clear that this is a publication about the Halloween universe.  When guests see this mammoth on your coffee table, they’ll think: “Yeah, (s)he’s a nerd, but also well-read and sexy to boot”*

*This is not a guarantee endorsed by the authors

To start off, we open with a nice recap of the existing Halloween sequels.  This is a great way to set the mood and bring you up to speed if it’s been a while since your last viewing.  Slicing into the meat (if you will) of each chapter , the well-written style and voice found in the first book are present.  The analyses and reviews of the material are supported by quotes from screenwriters and producers extracted from interviews given to publications such as Fangoria, Cinefantastique, and Starlog.  Personally, I thought this was great and did the book a favor in terms of nostalgia.  The authors’ criticisms of some of the awful sequel ideas are tinged with a wry humor that comes off in an l’m-laughing-with-you-not-at-you fashion.

Another thing this book does well is make you want to go back and re-read it’s predecessor.  There are frequent references and quotes taken from the first book’s exclusive interviews, and it serves as a reminder that a lot of this stuff can’t be read anywhere else.  Moreover, we are awarded conversations with the folks who actually wrote and/or worked on these “lost sequels”.  Many of the insights presented are unique solely to this book.  As was the case with the first Taking Shape, the interviews are totally candid, which is most welcome.

Each “lost sequel” is allotted its own chapter, complete with a breakdown of the would-be installment’s main points: story, analysis of The Shape’s suggested portrayal, and why the film was never made.  Learning why these sequels (and in some cases, prequels) never materialized is fascinating.  Although, It’s not surprising that a film putting Michael Myers in space never saw the light of day.  I’m talking to you, John Carpenter.  You’ll see what I mean.

If you enjoyed Taking Shape: Developing Halloween From Script to Scream, you’ll love Taking Shape II: The Lost Halloween Sequels.  Even if you’re some kind of masochist who decided not to read the first book, this one lends itself well to jumping in fresh.  I highly recommend it to any fan of the franchise.  I feel honored that Dustin asked me to review this book, and I look forward to what he and Travis have in store for us in the future!