1981 was a great year for horror fans. Michael Myers continued his holiday of terror in HALLOWEEN II, Jason was avenging his mother’s death in Friday the 13th’s sophomore entry, Ash was battling demons in the Evil Dead and classics like My Bloody Valentine and An American Werewolf in London were released to the delight of horror audiences everywhere.

With 81’s bountiful harvest of horror there exists another little gem that is easily overlooked, the excellent made-for-tv flick The Dark Night of the Scarecrow.

Mentally challenged Bubba Ritter befriends a little girl to the distaste and suspicions of a few of the townspeople, in particular the local postmaster Otis Hazelrigg. When a dog attack leaves the girl bloodied and mauled, Otis assembles a mob of his buddies to kill the “obvious” suspect…frightened Bubba Ritter whom they find hiding inside of a scarecrow. The mob administers swift “justice” and ends the falsely accused man’s life.

Soon afterwards a scarecrow (which appears to be the same as the one Bubba was hiding in) begins to appear. Coinciding with its appearance the members of the lynch mob receive some swift justice of their own.

Fans had awaited the release of this movie (the first movie ever to have a scarecrow as the center figure) to DVD for years and on September 28, 2010 they finally got their wish.  Now VCI ups the ante and on October 11th, 2011 will deliver the 30th anniversary Blu-Ray version of this great little horror flick. 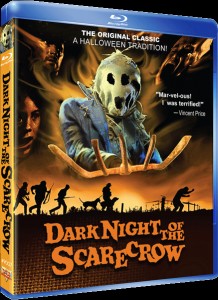