Locked in the subterranean chamber beneath the church, Dexter, and his imaginary father Harry, watch as Travis confronts his imaginary mentor Professor Gellar. From the cellar window Dexter learns Travis stole the sword of Damascus from the university and to prove Gellar’s immortality, proceeded to stab him with it. Wanting to believe Gellar survived Travis insured his fantasy by stashing the dead professor in an icebox. Having seen Gellar’s body, Travis is forced to abandon his mentor and strike out on his own. 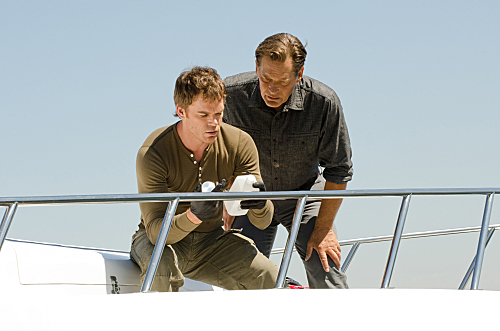 Dexter escapes from the basement and gets a text from his sister that the cops are canvassing the area. So with the cops closing in, Dexter partakes in his second favorite hobby, which is tampering with police evidence. Breaking a frozen hand off of Gellar, Dex plants the innocent mans fingerprints all over the church. Why? Because Dex wants the police to believe Gellar is still alive. He fears if the police are searching solely for Travis, they might catch him. I don’t buy it either. It’s awkward set up for future plot point.

Travelling with a frozen corpse, Dexter eludes the canvas and dumps Gellar’s body in a swamp and decides to keep his frozen hand in the morgue for future shenanigans. Dexter then uses Travis’s laptop to post as Gellar, enraging Travis who denounces him as a false prophet and states he will be rectifying his mistake. What that “mistake” isn’t immediately clear.

In the morning, Miami metro has finally found the Church headquarters of “DDK.” Deb has a panic attack and confides in her brother Dex, who offers emotional support if not profession. Concerned that Quinn hasn’t shown, Batista calls the parallel comedy show they star in to find him sleeping off a bender under a sprinkler. Hilarious! Where will this zany drunk wake up next? Ugh.

At the station, LaGeurta tries to undermine Deb’s authority by crashing her briefing. Dexter deduces the mistake Travis made was in letting his original “whore” victim, Holly, live. Lewis really wants Dexter to look at his video game and give him feedback. And during another Peet’s Coffee product placement (the company does not have stores in Miami FYI) Deb discovers it was Mathews that was with the dead hooker when she died.

Dex learns the whereabouts of the original “whore of Babylon” by visiting a foul-mouthed teenagers pool party. Travis visits the local home of one his more fanatical blog posters, “Doomsday Adam.” Recruiting him and his semi reluctant wife to his cause, he gets to the yacht and Holly before Dexter. Travis charmingly reintroduces himself to his former victim, “Hello Whore.”

Finding the yacht gone, Dexter sneaks into the security room and watches footage of Travis escaping with the boat. Taking note of its security GPS password, Dexter impersonates the married yacht owner over the phone and gets its coordinates.

At the station Deb shares Travis’s psychotic medical history, including a former therapists belief that Travis killed his own family. Deb remarks that Travis’s sister had no clue what her brother was really like, to which Dexter affirms “it happens.” At sea, Travis and his newly minted henchmen slit poor Holly’s throat. The team then prepares for their next tableau, a chemical attack described only as “wormwood.”

Hoping to say goodnight to Harrison and make Jaime work late, Dexter finds Lewis, annoying intern, in his living room. While Jaime puts Harrison to bed, Lewis finally shows Dexter the video game he’s been working on. Dexter is not pleased to find the game puts you in the role of history’s greatest serial killers, including “The Bay Harbor Butcher”, aka Dexter. Wishing he could escape his own dark passenger, the concept upsets Dexter and he proceeds to crush Lewis’s nerd dreams. This shakes up Lewis more than it should.

Unable to sleep, Lewis looks over Gellar’s blog and notes the strange video update from “Doomsday Adam.” Alerting Batista and providing him with Adams address, Lewis receives the first signs of approval from Jaime’s protective brother. Unable to locate his useless partner Quinn, Batista arrives at Adams house and interviews Adams wife alone. He’s about to leave when he notices an inconsistency in her story. Before he can say “jesus christ on a crutch”, Travis cracks him over the head with a blunt object. Now with Batista as his captive, Travis is inspired to unleashing his “wormwood” chemical attack on the Miami Metro Station.

Dexter tracks down the yacht and surprises “Doomsday Adam.” After dispatching him with a knife to the chest, Dexter also finds Holley’s body hung over the ships submerged anchor. Discovering the remnants of bomb chemicals, Dexter realizes that many, many more people could die. Arguing with his father, Dexter has to choose between continuing his own selfish pursuit of Travis or to involve the police that he’s been undermining all season. Admitting the capture of Travis is bigger than his own vendetta, Dexter calls 911 and alerts them to the location of the boat and the bomb making properties within.

How many times is Dexter going to allow his voice to be recorded by 911 this season? And what phone is he calling from? His voice will also be on the yachts GPS security call. And he showed his face at the pool party asking for Holly. When the yacht and Holly’s murder are discovered, those calls, and visits, will be scrutinized. Dexter should at least get off the boat, where he’s standing in broad daylight with a dead woman hanging off the bow, before he calls 911. You know, you can text 911 these days right Dex?

It’s nice to see Dexter admit catching Travis might be more important than killing him. I’m sure all the people Dexter has allowed Travis to kill might agree. He could have shut Travis down 8 episodes and 3 victims ago.

Now that Batista has been snatched while he should have been with him, Quinn will be forced to leave his Lost Weekend style BS and man up. His heartbroken drunk idiot subplot has been driven into the ground for so long it’s about to reappear in China. And where is Masuka’s roller derby blonde? Is her sub plot really over? I’m intrigued to see what Deb will do with Mathews and LaGeurta and their dead hooker problem. The concept of the station being attacked is also intriguing.

The parallels between Travis and Dexter were made overtly clear this episode with obvious, and unnecessary, call outs. The similarities between the two weren’t exactly subtle to begin with. The episode was book ended with both killers attempting to reject their ghost mentors, with Travis being the more successful of the two. Colin Hanks to my surprise makes a much better killer than he did nerd, I’m quite enjoying his performance here. He’s surprisingly sinister.

What is going on with Lewis? Clearly there’s more to him than what we know so far. Does he have a connection to Dexter unknown to us? Could Dexter’s mom have had another child, making Lewis another long lost brother? Lewis only seems interested in Jaime if he can get closer to Dexter. The same reason, Brian Moser, dated Deb.

It was recently announced that Dexter’s endgame begins this season and will culminate in a final season 8. I can’t help but think Dexter’s downfall is going to have something to do with his dead brother and Lewis.

Well my fellow Dark Passengers, what do you think of these developments?