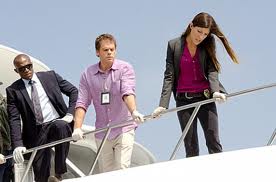 There are two severed hands at play in this season’s penultimate chapter, which would be enough to give it two thumbs up if I weren’t afraid to be sued.

Dexter’s anonymous 911 call from last week brings the Miami Metro fun times gang to the Ricochet Rabbit, equal parts pleasure boat and crime scene . There they find traces of Travis’s upcoming “wormwood” chemical attack and pair of corpses. Dexter has the pleasure of forensically reenacting his own kill of “Doomsday Adam” and Deb showcase her detective skills by identifying Holly from the back of her head as she hangs over the boats anchor. Deb reminds Dexter, seven episodes too late, that Travis needs to be stopped before he kills more people.

At the Doomsday residence, Travis is readying Adam’s wife for her sacrifice. With the chemical bomb in her backpack she heads off to Miami Metro. With Batista’s employee card she sidesteps the metal detectors and waits for her intended target, Deborah Morgan, to return. Realizing that Batista is missing and that his last stop was “Doomsday Adams” house, Quinn is rerouted from his hangover to save his partner from a fiery death. Escaping on foot, Travis soon finds shelter at the Elrod’s  retirement home and begins painting on the walls.

At the station Dexter recognizes Adams wife as she prepares to unleash the chemical attack on Deb. He quickly shoves the suicide bomber into an empty conference room and holds the door closed while Deb clears the building. Through a glass panel Dex watches as Mrs. Adam succumbs to the gas’s toxic effects. Afterward Dexter finds himself a hero for saving hundreds of lives. But in doing so Dexter was exposed to enough of the gas that it might impair him should he exert himself later in the episode.

Deb has dinner with Deputy Mathews and the two talk about his dead hooker problem. He plays the family friend card and she agrees to close the investigation. Dexter decides to make Travis come to him by taking Gellar’s frozen hand making a tableau of his own. But before Dexter can make off with his frosty five fingered facilitator, Lewis thanks Dexter for inspiring him to “stop playing games and do something with his life.” Unfortunately, Lewis also has a contraband appendage hidden away. Returning home Lewis packs up the ice truck killers prosthetic hand and addresses the box to Dexter.

In the morning Dexter’s satanic tableau is found, a water fountain and its statue covered in blood with Gellar’s hand as it’s centerpiece and 666 written across the statues forehead. The hand is identified as Gellar’s and the cut post mortem, so the hunt now focuses on Travis. The tableau makes the news and Travis recognizes the work of “the beast.” Dexter then sends Travis a taunting videotext with his boat in the background as bait. Inspired, Travis reworks his latest tableau painting to feature Dexter burning on a lake of fire.

Somebody find out about Mathews involvement with dead hooker and he blames Deborah for his sudden forced retirement. But she knows better and confronts LaGeurta who clearly did it to get Mathews out of the way and further her own career. She warns Deb that their future working relationship will not be good. In therapy Deb continues to praise Dexter and the therapist theorizes she might have feelings for her adopted brother. Furious at the suggestion, Deb storms out of the session only to later have a romantic dream about Dexter.

Dexter’s earlier inhalation of nerve gas lead him to be captured by Travis. He awakes at sea in a dingy loaded with gasoline while Travis proceeds to light the water around him on fire. Escaping in Dexter’s boat, Travis looks satisfied as Dexter’s dingy explodes in a fireball.  But Dexter escapes his bonds and survived by swimming under the explosion. At the episodes end Dexter is alone in the ocean wondering how his character came to be treading water.

Despite a few snarky comments, I was on the edge of my seat this entire episode. From Quinn’s super cop rescue of Batista, to the superbly staged attack on the station, this was a thrilling episode that never slowed down. Great performances and a few explosive character moments made this a highpoint for the season. Even Colin Hanks has completely changed my opinion of his abilities. Now that killer Travis is in control, Hanks is joyously ghoulish in his portrayal.

The Deb loves Dex subplot was completely unexpected yet made perfect sense given their relationship. It’s creepy, weird and can only lead to trouble for Deb and I love it. Yes, it’s yet another relationship subplot for Deb but the eventuality of her discovering her brother’s dark passenger elevates this development into “Oh Shit” territory. You also can’t help but think the shows writers are intentionally screwing with the recently divorced actors.

What the F*** is Lewis up to? Is he lashing out at his forensic role model because Dexter rejected his video game concept? That doesn’t explain how he knows Dexter has a connection to the ice truck killer. Does he know that they were siblings or that Dexter killed him? Producers claimed that Dexter’s “endgame” begins this episode and I think this and the Deb development are going to be the catalyst for Dexter’s eventual undoing.

Next week Deb will have to capture Travis to keep her new position and silence LaGeurta. And Dex is going to either sink or swim.

What are your thoughts?