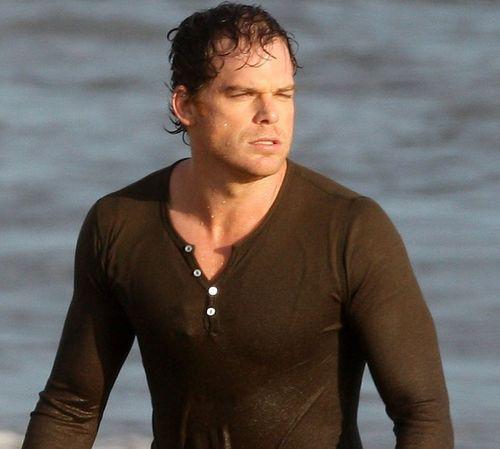 Dexter spends the night floating in the Gulf of Mexico clinging to a piece of his destroyed dingy. Miraculously he is picked up by a boatload of Cubans being ferried to Florida. When the ships captain robs his passengers and threatens to rape a refugee Dexter delivers a harpoon through his chest. Driving them to the coastline Dexter gets the refugee experience as he swims to shore and promptly borrows someone’s cell phone.

Meanwhile, a pair of rotting corpses in the kitchen complicate Travis’s living situation. Assembling a crib from their furniture Travis sets out to stage the witnessing of Doomsday. Dexter is reunited with Harrison, Jaime and an increasingly awkward Deb who all believe his lame story of “falling overboard” while on his boat. Deb gets a long hug in with a bare-chested Dex before telling him “I love you.” He returns the compliment in a brotherly way and the two are quickly called to the Elrod house, where Travis’s pungent victims have been discovered.

Arriving on the scene Dexter is told no one has gone into the house yet. Which is AMAZINGLY convenient because there is a giant mural of Dexter in the living room. Attacking the portrait with a hammer Dexter is able to erase his identity from it before Miami’s greatest detectives enter the crime scene. Ever the evidence thief, Dexter finds an original Travis illustration in the trash and makes off with it.

But Deb’s no dummy either, using Gellar’s journey, she comes to the same realization that Travis will be watching Armageddon from a Miami rooftop. But Dexter’s illustration is more detailed and he finds Travis’s “pillar of light” in a solar powered high rise.

At the station, Super Intern Lewis wants to stay on staff so he can keep an eye on Dexter. After delivering a painful Yoda impersonation Masuka promises to throw Lewis some freelance work. Deb asks Dexter if he wants to “unload” on her. He doesn’t. She then requests Dexter make a final forensic sweep over the church so they can close it out. He thinks to himself how it would make a great kill room for Travis. Batista informs Quinn, a car wreck of a human being, that he’s requested a transfer on his behalf. Deb hatches a plan to have uniformed police officers on every high rooftop in Miami and surprisingly LaGeurta goes along with it.

Assuming he’s dead, Travis goes to Dexter’s apartment and makes himself at home going as far to open Dexter’s mail from Lewis. Travis hides when hears Harrison and Jaime enter from the apartment next door. After they leave Travis looks around the nursery, and looks up appreciatively at his god “the beast (Dexter) has a son.” His eyes then settle on an invitation to Harrison’s Noah’s Arc pageant.

The Miami metro funky bunch realizes too late that the lamb in Gellar’s sketch is actually an innocent child. Travis kidnaps Harrison from the pageant to use as his sacrifice at the eclipse. Killing the uniformed police officer on the roof, Travis places Harrison in the crib he prepared earlier. Dexter arrives and plays the role of the beast. Offering himself as the sacrifice, Travis agrees if Dexter will inject himself with a syringe of M99. Travis puts Harrison in an elevator as Dexter injects himself and collapses. But when Travis prepares to bring the machete down on Dexter, he rolls out of the way and punches Travis out.

When the officer on the rooftop fails to call in, Miami Metro moves in and discover the dead police officer but no Travis. A surprisingly supportive LaGeurta consoles Deb. Dex keeps a very drugged Travis in his trunk and delivers Harrison to his nanny. Deb tells her shrink that she’s going to confront Dexter with her newfound feelings. The therapist warns her that Dexter might not feel the same way.

In his former church hideout, Travis wakes up on Dexter’s table and sits through zingers like “I am the father, the son, and serial killer.” Travis laments, “It wasn’t supposed to be like this” as Deb enters the church looking for Dexter. “Everything is happening as it should” Dexter states as his sister watches him plunge the knife into Travis. She gasps in horror and Dexter, realizing she’s there, sums up this season in two words “oh god.”

Is it that common to see a large group of Cubans swim to shore in Miami that nobody raises an eye? I understand there are certain things you have to overlook for this show to exist in the real world. But some elements are too big to ignore.

How did Dexter survive shooting himself with a syringe full of M99? Furthermore how does Dexter move his son and an unconscious Travis from the roof to his car in broad daylight? Not a single surveillance camera in that building? How did the uniformed policeman on the roof overlook Travis’s cradle tableau setting? Why in the hell would Dexter use a well know crime scene, where his job expects him to be, to kill Travis and not LOCK THE DOOR.

A route conclusion to the DDK storyline capped by a game-changing cliffhanger. Overall a slight improvement from season 5 but still a far cry from season 1-4. Let’s get into some of these arcs.

Quinn and Batista. These two spent the season as partners, alternately getting high, drunk and punching each other out. Quinn’s character is stuck and a room full of writers can’t get him straightened out. He’s got photo evidence of Dexter being up to no good but can’t move past being in love with his sister. His resolution at the end of the season is to get help for his drinking so he can stay in homicide. That was worth dragging out 12 episodes? Batista had little to do outside of being protective of his sister and being disappointed in Quinn.

LaGeurta’s character sought to redeem her background villain role this season by recognizing Deb’s potential. She works much better as a peripheral character than she did as the sub plot wasting wife of Batista.

Masuka had briefly satisfying sub plot with the hot roller derby intern that only accomplished getting the Ice Truck killer’s prop hand into play. Whatever motivation Lewis has in screwing with Dexter it’s not revealed here. I honestly do not think the writers know for sure either, they’ve left themselves a lot of wriggle room and conversely little pay off for this development.

Seemingly cured of his multiple personalities Travis was spent the final episodes joyously murderous. While this persona was more fun to watch, it was a missed opportunity to play with his fractured personalities. Part of Travis wanted the “Gellar” inside him punished for killing his own sister. What happened to that? He became just another one note killer for Dexter to dispatch, albeit with religious motivation.

We almost made it a full season without Deb’s love life railroading her storyline. Watching Deb move into a leadership role was the best storyline for this character in six seasons on Dexter. However, her love life can back into prominence in a way that was at least unpredictable. My only complaint is that this development moved too quickly for me. Within an episode of admitting it to herself she wants to share it with Dexter. A slower build up could have had us squirming longer and it wouldn’t have felt shoehorned in at the end of the season.

What did Dexter learn from Brother Sam? That “light can not exist without the dark?” What about the offer Dexter made to god over the coffee machine in episode 5. Was that ever redeemed? There was a theme of fatherhood and legacy touched upon in this season but no one of it really came together. It’s hard to tell how much of Dexter is actually a sincere human and what part is Harry’s training. If he is unlikeable it is not because he’s a killer, it’s because he manipulates the people who care about him so he can indulge his dark passenger. He’s selfish.

Now that Deb knows he’s a killer it won’t be hard for her to put the pieces of the past six seasons together. Brian Moser. Doakes. Trinity. Lumen and now DDK. He’s saved her life enough times that she might not turn him in. But will she want to work with someone who is undermining her career at every turn? I imagine her newfound feelings for Dexter are going to complicate matters, or otherwise they wouldn’t have been introduced so late in the season.

The last few episodes were clearly setting up the next two seasons and the conclusion of Dexter’s story. Sadly, I agree that it’s time to wrap this show up. The formula hasn’t changed much in six seasons; we all knew episode 12 would end with the one of the big bads on Dexter’s table. Rita’s death was the only real surprise in the series and her death was less a game changer for Dexter’s character than it was a reset button, simplifying his home life and streamlining the cast. He didn’t learn from it and it didn’t alter his character at all.