In a lab Dexter examines the angel wings taken off last weeks victim of the Doomsday Killer. He discovers an unusual type of restoration glue used to make a repair inside the wing. Turning in his chair to face the audience, the wings on the table neatly line up with Dexter, identifying him as our titular Angel of Death.

Over prayers, the cracks in Travis and Gellar partnership become evident. Travis is trying hard to make his mentor pleased but is not receiving the word of god. We also learn that in addition to being a theatrical serial killer, Gellar is also a talented painter. Having painted scenes of his earlier ecclesiastical murders, his “Whore of Babylon” portrait still needs a face. With Gellar’s picture plastered on the front page of every newspaper, the task of whore snatching falls to Travis.

Dexter goes to a local museum to investigate the glue he discovered when he recognizes Travis, who works as a restoration expert. Called away to a beach side crime scene Dexter impresses Chicago transplant Mike Anderson with his uncanny detective skills. When the crime scene’s greedy landlord shows up, the chip on Anderson’s shoulder becomes visibly bigger.

In an uncomfortable bonding scene, seemingly square, Dexter and Brother Sam drink beers on his porch. Dex shares some of the darkness that has shaped him, specifically the death of his mother (I’m assuming Sam knows about Rita’s death as well). Sam suggests you only need a little light to combat the darkness inside our selves and “the light is your son.”

Travis meanwhile botches his kidnapping attempt and returns to Gellar a failure. In the morning, Dexter breaks into Travis’s apartment and matches the numbers found inside the victims to page numbers cut out of his giant bible. But before Dex can kill him, Travis and Gellar run over a young couple and throw the woman in their trunk. Ever the teacher Gellar admonishes his student “See how easy it is?”

At the university, Quinn interviews Professor Porter, one of Gellar’s former teaching assistants and conquests. Apparently Gellar had an earthly calling for brunettes with tramp stamps. As does Detective Quinn. Ever the consummate professional, he gets drunk with Porter and goes home with her. In the morning when Batista goes to the Porter’s apartment to collect his lothario partner, he stumbles across an ill placed box marked “GELLAR.” Neatly arranged inside are Gellar’s journals, which contain an illustrated outline of the murders he’s committing now. It’s damning evidence that can’t be used in court because of Quinn’s involvement with the woman how Batista “discovered” it.

Hiding in Taylor’s back seat, Dexter throws a wire around his neck and interviews him while making him drive to his own kill site. Travis shamefully admits he wasn’t able to carry out the killings himself but that Gellar had to kill them. Discovering he’s not an actual “hands on killer,” Dexter mercifully allows Travis to live. And even returns his car for him (I wonder if he filled the tank first).

After leaving grisly crime scene photos lying around where Harrison can see them, Deb realizes she needs her own place. Returning to the beachside crime scene with Anderson, the duo intimidates the landlord to give her the place at a discount. He agrees if she cleans up the blood.

Dexter begins to follow Travis hoping to be led to Gellar. Travis wisely checks his back seat for inconsistent vigilantes before driving off. And finally, an unseen assailant guns down Brother Sam as he opens his shop.

On The Table.
I’ve got some issues with this episode. Dexter theorized, correctly, during the joggers autopsy that they were two killers because the sloppy wounds inflicted did not match the careful staging of the murder. Now, Travis is admitting he never killed anyone. Did he just do the cutting or was the entire reason for Dexter believing there was two killers an error? Wasn’t Gellar waiting in the car when Travis confronted the fruit seller?

Also by keeping parts of the investigation to himself, Dexter is actually responsible for the harm the Doomsday Killers caused this episode. He could of prevented two vehicular assaults, an attempted kidnapping and one kidnapping. The fate of the woman in the trunk doesn’t look good, so we can most likely add murder to the list. Here Dexter is actually causing more harm than good by manipulating the case. Which brings me to a lesson he should have learned at the conclusion of season 4…

Dexter made a serious error when he let Trinity continue to live so he could learn from him. Trinity went on to murder, kidnap children and even kill Dexter’s wife. By letting Travis go, he is committing a similar mistake. I don’t believe that Travis falls into a code loophole because he did not actually do the killing (supposedly). Last season’s big bad Jordan Chase didn’t dirty his own hands until the end and still fit Dexter’s code. That Dexter would let Travis go after assisting in kidnapping, torture and homicide is out of character for Dexter.

“Angel of Death” was another episode wisely spent on the larger plot without a kill of the week shoehorned in. The Brother Sam character has become a nice addition to Dexter’s world and I’m curious to how Dexter will react to his shooting and possible death. I’m going to assume the identity of the shooter is the ex-con he recently baptized. Masuka’s missing evidence sub plot needs to tie into part of the larger plot soon. I’m guessing Mike Andersons critique of the station personal is going to be justified with Masuka, Quinn and Batista’s mistakes coming back to haunt them. If Dexter keeps killing suspects before she can arrest them, Deb is going to be the one to pay the price. 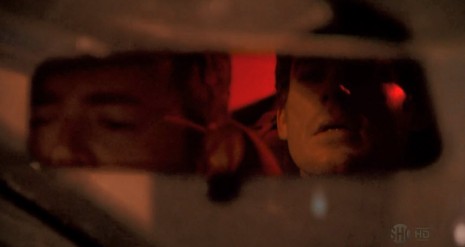