After abandoning his sister and job last week for a murderous road trip, Dexter has some apologizing to do. Over conciliatory coffee and donuts, he lies about where he went and, of course, what he did. Oh, and he needs the morning off for Brother Sam’s funeral. “Funerals and donuts” Deb says shaking her head in disbelief “you’re really good.” Dex also learns Miami Metro knows “DDK” has an accomplice and is narrowing in suspects. This accelerates Dexter’s impulse to flip Travis to his side. 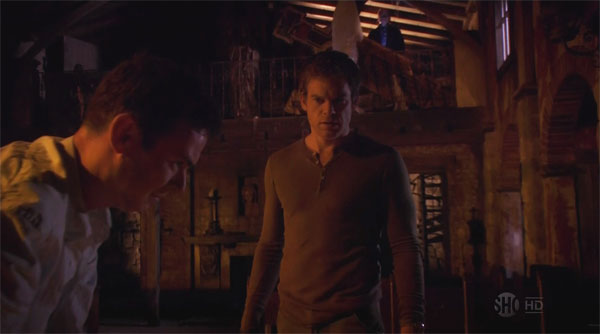 Not taking their break up well, Gellar again drops in on Travis while he’s making scones for his sister. Gellar makes allusions to Travis’s sister becoming their new “whore of Babylon.” Travis reacts by trying to take his sister to Disneyland (the most obvious place to escape the apocalypse).

Brother Sam’s ashes are spread in the same Harbor Nick was baptized and drowned in. As per his final wishes, Dexter is given Sam’s blood stained bible. Dex recalls Sam saying the book had all the answers. Dexter then sneaks into the Art Institutes restoration lab and confronts Travis face to face. Dexter offers to “take care of Gellar” and shield Travis from the police if Travis will cooperate with him. Travis balks that anyone could take care of anyone so dangerous as Gellar.

Called away from his “lunch break” (should the serial killer thing fall through Dex could teach seminars on time management) Dex visits the scene of a dead hotel hooker. By examining the irregular “zigzag” blood flow from her noise and her broken ribs, Dex theorizes that she died of natural causes but that someone else was in the room and attempted to revive her. Captain LaGeurta makes a surprise visit to the scene belaying its importance (more on this non-mystery in a moment).

Lewis, Masuka’s nerdy intern, continues his romance with Jaime much to her older brothers consternation. Over an incredibly uncomfortable lunch, Batista flashes his gun at the weak limbed game writer and laments “he doesn’t want to see anybody get hurt.” Lewis gets the picture and starts ignoring Jaime’s.

Taking Brother Sam’s advice, Dexter looks through his new bible, separating blood stuck pages looking for a way to reason with Travis. Surprisingly him at a local diner, Dex presents the gooey bible to Travis and the two talk about the titular “sin of omission.” The starch shirted Travis seems to think he can protect his sister. If he can get his sister to safety, possibly in Space Mountain, Travis will help Dexter catch Gellar.

Meanwhile, Deb visits Travis’s sister house to ask about his relationship to Gellar. Opening up to the woman, with whom she has A LOT in common with, Travis’s sister reveals they lost their parents young and she raised Travis. Deb leaves her with a card and just misses Travis as he rides his ten-speed past the house.
LaGeurta congratulates Deb in a bathroom confrontation that mirrors a scene from the first season. After berating Deb into closing the books on the dead hooker, LaGeurta phones a mystery man and tells him he’s in the clear. We know from the first episode of the season that LaGeurta got her promotion due to Mathew’s penchant for hookers. Is there anybody else she would be motivated to cover up for?

Travis, the tough as nails protector of his sister, hides on the playground and waits secretly waits for the school day to end (why is he hiding at a place he has visited openly in the past?). But Gellar introduces his face to a shovel before the final bell.

In Dexter’s office Deb picks up a pen with “Shady Lane, Nebraska, KY” stenciled on the side (presumably a “souvenir” from impaling the desk clerk). Recognizing it as the place where Jonah lives, Deb correctly guesses that’s where Dexter went on his impromptu vacation. Feeling betrayed and shut out, Deb reminds Dex that she also lost someone to Trinity (Lundy). If he needs someone to talk to why not her? Before Dex can tell her more lies they learn “DDK” has struck again.

The “Whore of Babylon” tableau has been staged at the school where Travis’s sister teaches. Pulling off the mask it’s revealed, unsurprisingly, to be her. Ever the helpful forensic scientist, Dexter steals more evidence to hinder his sisters investigation and further his own. Dexter even admits he may be responsible for her death (he is). Adding to the tension, Deb’s card is found pinned to the body. And Travis is now officially outted as Gellar’s accomplice.

In talking about Travis and his sister, Deb might as well be talking about herself. Neither really knows their brother as well as they’d like to think and both women are denying the obvious. At a Comic-Con panel in 2009, Jennifer Carpenter who portrays Deb, pointed to a scene at the end of season one where she witnessed Dex and the Brian Moser arguing over weather or not to kill her. She theorizes her character, on some level, understands something is not right with her brother.

Quinn continues his downward slide at a strip club with Masuka in tow. Ever the strip club pro, Masuka paces himself while Quinn drunkenly proposes marriage to “green thong.” You know you’re in a bad shape when you’ve embarrassed Masuka.

Dexter’s theft of evidence leads him to Father Gelwar, a retired priest with dementia. After confessing to be a mass murder, the forgetful priest absolves Dexter of his sins. At the convalescent home Dexter learns the location of his abandoned church and deduces what a picturesque hide out it would make for Gellar.

After rejecting her dinner offer, Dex drops in at his apartment to say goodnight to his son and is surprised to find Deb there. Desperate to connect with her brother, she planned a quiet night for the two of them. Dex, eager to kill Gellar, save Travis and destroy her career, brusquely dismisses her and stalks off into the night.

Dexter tips off Gellar to his arrival because HE PARKS TOO CLOSE to the site he is attempting to take by surprise. Walking around mechanically with his syringe ready, Dex not only reveals his face to Gellar but also lets him escape. Dexter’s consolation is the chained Travis, who is now eager to see Gellar dead.

Sigh…Dexter learned NOTHING from his experiences with Trinity. He’s revealed himself openly to Travis and now Gellar. With Deb presumably in danger (again), will he do a better job of protecting his sister than he did his wife?

Dexter is becoming harder to sympathize with. By sabotaging the police investigation, he’s allowed DDK to kill more victims, he’s destroyed his sisters career and has betrayed all his friends. Deb is not stupid, it would not take much effort for her to find out the proprietor of “Shady Lane” disappeared during Dexter’s stay there.

I did enjoy the scenes between Dex and Deb this episode. Deb has been slowly calculating the inconsistencies of Dexter’s story for a few seasons. I feel this sub-plot is heading toward a season ending game changer. The show and Dexter the character can’t go on forever. If anyone is going to bring Dex down it will be his real life ex-wife. Did anyone else see some method acting to Jennifer Carpenter’s anger in her scenes with Michael C. Hall?