This episode opens with Dexter performing his other ritual, readying his son for bed. We hear Harrison speak for the first time when he requests a “Monster Story.” Dexter relates a brief allegory about thug terrorizing a neighborhood and how daddy destroyed the monster. Dexter is then shocked to hear Harrison say “Daddies box.” Harrison is now at the age where cognitive thought is developing and he understands that “monsters” end up in Dexter’s blood slide case. Dexter now has to consider how much of himself he can expose to his own son.

Quinn finally proposes to Deb who wasn’t looking to advance their relationship. At the station she reluctantly finds herself a web sensation after last weeks shooting. Masuka has an attractive new intern who might be as randy as he is. And Captain Mathews strikes back at LaGeurta for blackmailing her. Instead of the deserved Batista, Mathews offers the vacant Lieutenant position to Deb. Who astutely replies “Fu** balls, your serious?”

The department investigation of the murdered fruit vendor brings them in contact with Brother Sam (played convincingly by Mos Def). An admitted killer, a mistrial set Sam loose years earlier. Dexter had planned on adding Sam to his blood slide collection until a drug raid sent him back to prison. Having found religion inside, Sam now employs, and looks out for, ex-cons at the “Good Shepard” body shop. Seemingly haunted by his past, Sam claims “Men can change.” But Dex isn’t buying it.

Over a six-pack, Dexter and Deb illustrate how the departed Harry is still affecting them both. Dexter wants to be a father that can be looked up to and Deb is no longer looking up to her own. By receiving a promotion he never did, she’s surpassing her father as a cop and a mentor. But Dexter knows his father was too busy with him to take that promotion. He’s also concerned how Harrison will see him. The father, son and holy-ghost Trinity hang over Harry, Dexter and Harrison.

Our co-dependent Big Bad duo continues to prepare for the end of the world. But their relationship is strained when Travis, the apprentice, takes a night off from the apocalypse to have dinner with his sister. Returning to their religious themed hide out, his mentor burns his forearm with a flame-heated rod to show his disappointment. Tyler begs forgiveness and kills a jogger to make amends.
Moving in on Brother Sam, Dexter is surprised to discover the lengths he’ll go to protect his “flock.” When a group of gangbangers come to retrieve one of their members from his care, Sam seems ready to die to protect him. Dexter intervenes and delivers a beat down to one of the gang members. By outing himself as a member of “Miami Metro” Dexter saves Brother Sam. Before leaving, the lead gang member brags about a Barber he recently killed, thereby taking Sam’s place as our kill of the week.

Batista gives Deb his blessing for her promotion and saves his anger for LaGeurta “Mathews hates you but I’m, always the one paying the price.” Deb turns down Quinn’s proposal and moves back in with Dexter. Quinn, of course, blames Dexter for Deb turning him down. An uncomfortable LaGeurta is forced to introduce Deborah Morgan to the department as the new LT.

In an extremely well filmed scene, Dexter dispatches the gang-banger in the defunct barbershop. Afterward he sinks to the floor with the revelation “There are no happy endings for Monsters.” At home Dexter gives Harrison is own wooden case, hoping to make him forgot about his fathers. As he closes the door on his sleeping son, he accepts that he’ll never show him his true self again.

The Good.
This season is looking better with this episode. I love the way Dexter is being written this season, he’s got more of a caustic bite in his inner monologue. I like seeing Dexter’s physical side when he knocks out a thug. He’s got more moves than swinging a knife. I’m also very happy to see the conflict returning to Quinn and Dexter’s relationship. Deb’s promotion is an excellent way to create conflict with the supporting cast. Mos Def is a welcome addition to the guest star pantheon and I’m very curious to see how his character arc plays out. Dexter’s relationship with his son took a heartbreaking turn when he realized that he’s still ostensibly alone in the world. He can only reveal himself to his victims and dead father.

Michael C. Hall and Jennifer Carpenter continue to have great on screen chemistry in spite of their recent divorce. Despite reports of tension on the set, the two appear to still be able to work together well.

The Bad.
For this show to have a kill of the week, certain coincidences and happenstance need to occur. It’s a bit of a stretch to think after Dexter identifies himself as a member of Miami Metro, the lead gang-banger would brag about committing murder. I understand we were running out of time and needed to get a kill but it’s convenient television logic in an otherwise well written episode.

I’m also experiencing Deb relationship fatigue. So many of her sub plots revolve around her love life. Hoping her new role in the department gives her some new challenges.

Upcoming.
Is Brother Sam going to take Dexter into his flock? Will Deb royally screw up as LT? And what sick s*** will our Big Bad Duo get up to next? I’m suddenly very excited about this season. 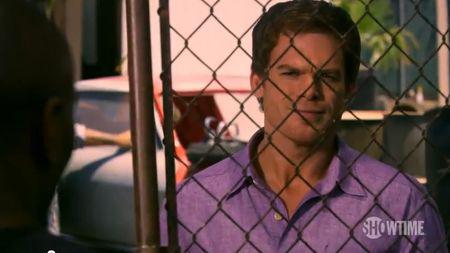