“Smokey and the Bandit.”

When a hooker turns up dead with dental damage, Dexter is reminded of a serial killer he idolized in high school. This “Tooth Fairy” terrorized the Pacific Northwest in the 80’s and was never caught. Theorizing that the killer would be elderly by now, Dexter zeroes in on a suspect at a nearby “retirement village.” Dexter befriends the cantankerous old SOB on a golf course.

Meanwhile Deb has her first day as Lieutenant and finds herself consistently undermined by LaGeurta who doesn’t believe in her leadership. Batista lends his support to Deb as she tries to define her leadership role within the station. In trying to impress his hot intern, Masuka shows her evidence from the ice cream truck killer evidence (Dexter’s brother). A serial killer aficionado, she steals a prosthetic arm from evidence, setting Masuka up for some trouble.

At the big bad secret religious hideout, the kidnapped jogger from last episode is surprisingly alive and chained to the floor. Tortured by Colin Hanks acting, the victim is asked to repent for his sins. After briefly escaping his bonds and nearly being trampled by a horse, the jogger is deemed “ready” by General Adama (aka Edward James Olmos playing a character that has yet to be named onscreen).

After he bullies Dexter into picking up his prescription and skin mags, the old man ditches him to spend some quality time in a storage shed. Dexter breaks into the shed after the old man leaves and finds his trophy case. A wooden case, not unlike Dexter’s blood slide case, filled with teeth stolen from his victims. Dexter makes plans for his the “Tooth Fairy” but soon has the tables turned on him by his octogenarian counterpart. Only by driving his newly fixed car into a fence does Dexter disarm the tooth fairy (and insure another trip to Brother Sam).

Deb disregards LaGeurta and interviews her own pick for a new detective. Quinn rejects Deb’s apology and has sad break up sex with a hot brunette. Batista makes himself feel better by buying his high school dream car. And with a tease of more to come next week, our religious killing duo make a bold statement with a four horses, some mannequins and a dead jogger.

Dispatching the elderly tooth fairy, Dexter can’t help but see the similarities between this man and himself. Will he end up alone and hated by his family like this man? Dexter wants to believe they are nothing alike but the seed of doubt has been planted. What kind of legacy will he be leaving his own son?

This season is picking up speed and the conflicts are building on each other nicely. Is Masuka’s intern really into him or is she playing him for more evidence? If he goes down for mishandling evidence will he take Deb down with him? What is Quinn going to do now that he’s heartbroken with Deb and holding a grudge against her brother? Is Brother Sam going to notice the bullet hole in Dexter’s car? Why bring back the Ice Cream Truck killer into the narrative unless it’s going to affect Deb or Dex? Deb discovered he was Dexter’s brother at the end of season 4 but the fallout of that was lost in Rita’s death. And the horrible fifth season. Now would be a great time to re-address it. 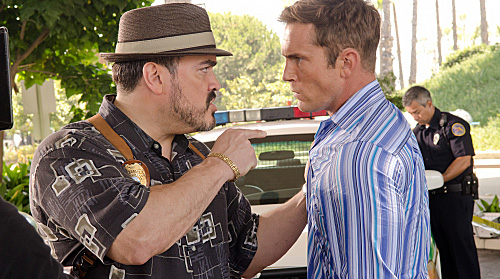