If Michael wore a different mask,would it still feel like and be a HalloweeN film? I remember Vince and Mike from Rabbit in Red Radio talking about this awhile ago, but I never really thought about it until a few days ago. My first thought was yes – Michael needs his white mask or it wouldn’t be Halloween. But after some thought I decided the mask doesn’t make Michael, Michael makes Michael. To explain this best as possible I will break this down using previous Halloween films as reference. You will see how the mask doesn’t really define the character. Let’s begin. My first piece of evidence is Halloween 4. In the beginning of the film he has bandages covering his face and that is what I would like to focus on.  The bandages could be considered a mask from the way they were covering the face, and to me look better than the eventual mask he ends up with. Had Michael wore that the whole time then I would lose my one complaint with the film. Even the brief time we see him kill with the bandages on we know that is the one and only Michael.  Still not convinced? Okay I have more. 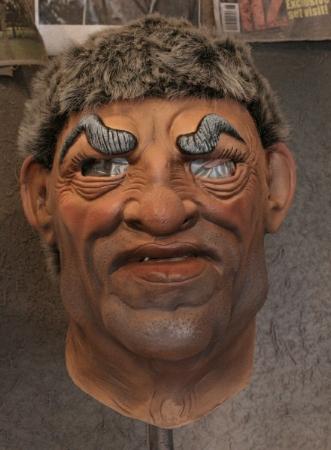 Lets shift now from Halloween 4 to Halloween 5. I’m not a fan of the white H5 Myers mask, but it does have a small look that lets it coast by. Michael switches masks for a moment and wears the oh-so-awesome Brute mask. The Brute is only seen for five minutes but what an impression it makes. Had Michael wore this mask the whole time, again, I would lose one of the three complaints I had with the film.

If you’re still thinking he has to have the white mask to be Michael, then lets jump to the new series of Halloween. 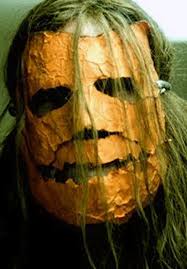 Halloween 2007 gave you a glimpse of Michael’s life inside Smith’s Grove and showed just how much he loved masks. The mask above is the Escape mask. How bad ass was that pumpkin-like mask scene, where he slides it on, kills the guards and escapes. This mask made a statement and that was Michael whether the mask is white or orange. I wouldn’t have batted a lash had he wore that the whole time and it probably would still have been a good film.

Michael has worn other masks in the series and not once did I feel the movie shifted when he changed masks. It’s the tilting of the head, the walk, the stabbing motions and the eyes that define Myers to me. Not just an all white mask. That’s why I say Michael is Michael regardless of what he wears over his face.