About two months ago I was reading up on my Horror Hound when a little announcement caught my eye. It wasn’t so much the title, but the pictures that really reeled me in. I really haven’t seen anything noteworthy from Post Studios  since the mid 90’s and that is even questionable, because I was 11 at the time. But the masks that are set to released/have been released are actually quite stunning.

The first set of masks to really catch my eye were the Killer Klowns From Outer Space set. There are four in the set and from what I see are damn near screen accurate. Though Bump In The Night’s line does look more detailed (but that also comes with a larger price tag).

The next two were that of Mohawk from Gremlins 2 and the little bald monster from Ghoulies (I’m not sure of his real name). Mohawk has great detail and looks like it would make a great display piece . Wearing it might look okay but I don’t see it pulling off a good look, unless you had the hands to match and a suit (no picture could be found at this time, just ad pics). The Ghoulies mask is another perfect display piece – the detail for a mass produced mask is very good. I would say that this is the first time in many years that the masks actually look like the characters they are meant to portray.

The last little thing to grab me was the re-release of The Witch, The Pumpkin and The Skull from Halloween III. There will be a deluxe limited edition and a mass produced edition.  I’m not 100% on the release date for these nor have I seen a picture of the quality. We will have to wait until they get closer to the release date to find out any more information.

I hope they look this good! 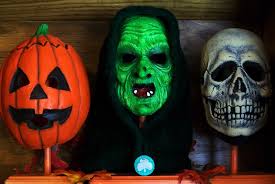