Haddonfield Citizens: The Hermit of Halloween 5

Listed in the credits as “Mountain Man,” the unnamed Hermit in Halloween 5: The Revenge of Michael Myers resided on the outskirts of Haddonfield. He lived with a parrot named Snookie and a serial killer named Michael. The Hermit’s cabin was located close to an old mineshaft that was covered by quicksand. Away from the hustle and bustle of Haddonfield, the Hermit chose to carry out a solitary existence (either that or he was chased out of town by angry villagers with torches). 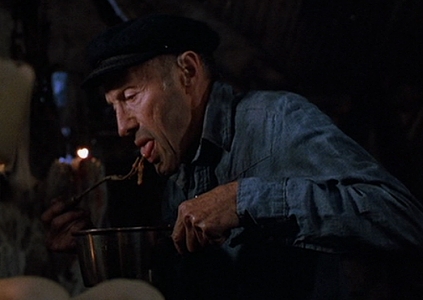 The Mountain Man cooked out of industrial grade steel pots. He built his shack all by himself using discarded plywood sheets, tree branches, and assorted garbage. The Hermit had no need for modern day comforts. His bed was made out of solid rock and didn’t have blankets or pillows. 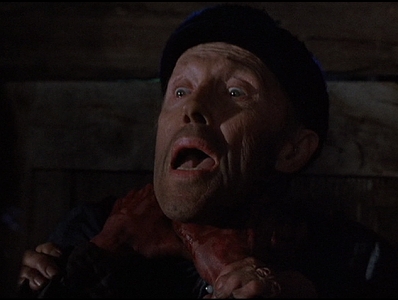 Depending on how you perceive things, you can say that the Hermit had either exceptional hearing or terrible hearing. The Hermit heard Michael Myers trespass onto his property due to the sound of a single twig breaking. Yet, the Hermit didn’t hear the police sirens, the gun blasts from the shootout with Michael, or the dynamite explosion at the nearby mineshaft (WTF?).

The character of the Hermit was shrouded in secrecy. During the production of Halloween 5: The Revenge of Michael Myers, the Mountain Man (or Hermit Da Frog, as Jamie Lloyd liked to call him) would show up on the set wearing all black. He would just stand there staring. 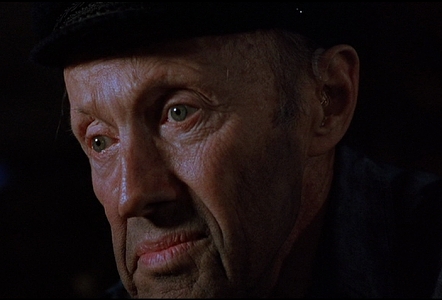 Ultimately, the Hermit made too much noise with the steel pots so he was removed from the movie. The script for Halloween 5 was re-written and every scene in the film was re-shot. However, the final cut for Halloween 5 still includes the Hermit, even though the movie’s director can’t explain why or how those scenes are still in there. To this day, the director maintains he doesn’t know who The Hermit was supposed to be.