The HALLOWEEN film franchise has produced one of the most loyal fan bases ever witnessed in movie history.  We the fans watch these films repeatedly, enjoying and scrutinizing over each and every detail.

This article will be the first in a series examining the different, unreleased versions of the Halloween movies. First up is one of my personal favorites: the TV cut of  John Carpenter’s HALLOWEEN. 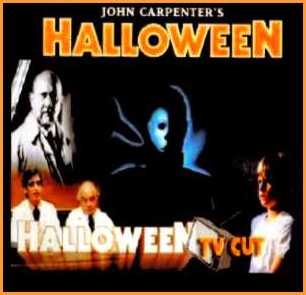 HalloweeN came to theatres in the Fall of 1978.  Eventually word of mouth and a couple of favorable reviews by Tim Allen of  The Village Voice and Roger Ebert helped catalpult the movie into a huge success.

By 1980 the movie was already one of the most successful in horror history.  It was during  this year that NBC decided to buy the television rights to HALLOWEEN  for $4 million.

NBC’s Standards & Practices Department demanded several scenes of the original movie be censored before airing on television.  Debra Hill and John Carpenter fought against the censorship but to no avail.  Due to these cuts, an additional twelve minutes of new footage had to be filmed in order to fill the two hour time slot for the movie’s network broadcast.  This additional footage resulted in four new scenes.

The first scene is entitled “BOARD REVIEW” and is excellent.
***SPOILER ALERT****  (Detailed info of each new scene follows) 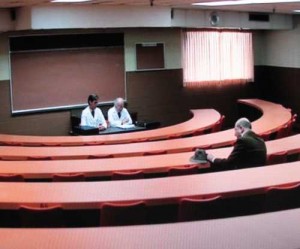 In this scene Dr. Loomis is at the minimum security Smith’s Grove Warren County Sanitarium pleading to a board who is reviewing his request that Michael be moved to a maximum security facility “immediately.”

Loomis states the staff isn’t “adequately prepared” and that “Michael Myers is the most dangerous patient I have ever observed.”

One of the two present board members snidely dismisses Loomis’ pleas and states that Myers is a “catatonic.” Loomis tells him that the catatonia is a “conscience act” and that “there is an instictive force within him…he’s waiting.”

However when asked by the other board member waiting “for what?” Loomis has to reply “I don’t know.”  At this point there is little more Loomis can say and realizes his efforts to have Michael transferred will be fruitless.

The board denies the transfer and Loomis exasperatingly walks out of the room.

I love this scene because Pleasance (as usual) gives a stellar performance, but also it gives more creedence to Loomis’  future claims of how he tried to warn everyone that Michael warranted more caution but no one listened.

The next scene “YOU FOOLED THEM, MICHAEL” ends where the last scene left off. 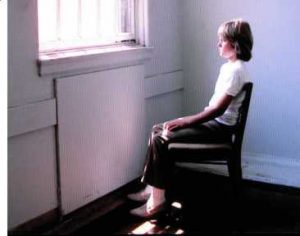 In this scene (which is another good one) we see Loomis walking from where he had just left the board review to a room down the hall in which sits a young Michael Myers staring out the sole window. You can easily see that “blank stare” in this scene that Loomis talks about later.

Loomis enters the room and for a few moments he just watches Michael staring out the window.  Then after awhile he speaks to him saying “You’ve fooled them haven’t you Michael?…but not me.”

The third of the four new scenes “THE EVIL IS GONE!” is my second favorite of the added footage and also helps tie HALLOWEEN and HALLOWEEN II together. 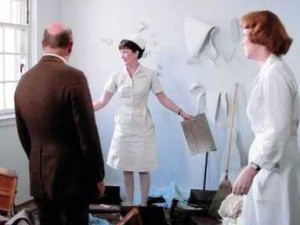 This one starts with a shot of Loomis back at the sanitarium walking down a hallway (toward Michael’s room) with a nurse who is telling him that it “took us most of the night to round up the patients”. A moment later he and the nurse enters the single windowed room (the same room as from the “YOU FOOLED THEM, MICHAEL”scene) where Michael stayed before escaping the sanitarium the night before.

As he and the nurse enter we see that the room is trashed and the windows (both the single window and the door’s small window) are broken out.  Another nurse is already awaiting them when they walk in and states to Loomis: “He must have broken the window with his hands.”  To this statement the nurse that walked in with Loomis adds: “He came down the hall, breaking through all the doors, pushing all of the patients outside.”

Loomis answers her only with: “What was it you wanted to show me?”  She closes the door they entered to Michael’s room and now we can see the word “SISTER” carved into the door in large letters.  The other nurse (who was already in the room) asks Loomis: “Dr. Loomis, Have they found him yet?” To this Loomis replies, “No, but I know where he is going.”

The fourth and final of the new scenes is “BORROWING CLOTHES”. 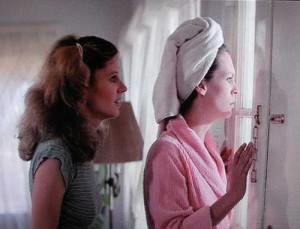 This scene begins with Lynda ringing the doorbell at Laurie’s house.  Laurie opens the door and Lynda runs in frantically pleading “hurry up, hurry up, shut the door, shut the door!”

Lynda tells Laurie that “Some guy is following me…I think it’s that guy that passed us on the street in that station wagon.”

One thing of interest is that Jamie Lee is wearing a towel on her head during this scene and a robe.  These additional scenes were filmed during the production of HALLOWEEN II and at this time Jamie’s hair was shorter than she wore it during HALLOWEEN.  This is probably why the only new scene featuring Jamie showed her with her hair hidden.

Just a couple of final notes about the HALLOWEEN TV cut:

The television cut has never been released EXACTLY as it appeared on television but it has seen a slightly less censored release both as an accident and also as a limited release a couple of times.

Some early copies of the “slightly less censored” television cut were mistakingly released to VHS and laserdisc when the movie first became available for home viewing.  I do not know how many exist but they are rare and would be a nice addition to any collection.

In addition to the accidental releases, this version also saw two official releases.  In 1999 Anchor bay released the 2-dvd THX limited edition set that featured the restored version of Halloween as the first disc and the television version as the second.  In 2001 the television version was offered once again this time as a single disc and renamed “The Extended Edition”.  Both the THX Limited Edition set and Extended Edition are out of print.