The Halloween Autographs series continues with Michelle Williams, co-star of 1998’s Halloween: H20. Michelle played Molly, the girlfriend of Laurie’s son John Tate. At the time of H20’s release, Michelle was primarily known for her work on the television show Dawson’s Creek. 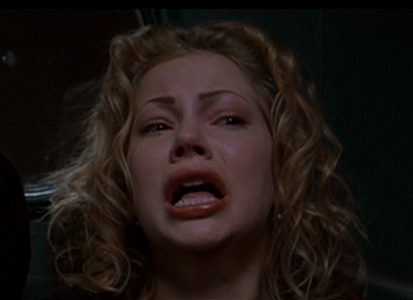 While I have many gripes with Halloween: H20, I thought Michelle Williams did a good job in the movie. I especially enjoyed her look of distress, anguish and doubt in the scene where Jamie Lee Curtis ordered her to drive away from the school (so that Laurie could go pursue Michael Myers on her own).

This particular autograph was obtained by my sister years ago; back when Michelle still signed both her first and last names (her signature is currently a very quick scribble). It was obtained during the Toronto International Film Festival. My sister had been a fan of Dawson’s Creek and her high school was near a trendy downtown area where celebs hung out (she was always running into people like Robin Williams, Anthony Hopkins and Bret “The Hitman” Hart). In case you missed part one of the Halloween Autographs series, you can find it here.