In part one of our Halloween: Resurrection review, we talked about the opening scene and the conclusion of Laurie Strode’s story. Now we delve into the film’s main storyline. 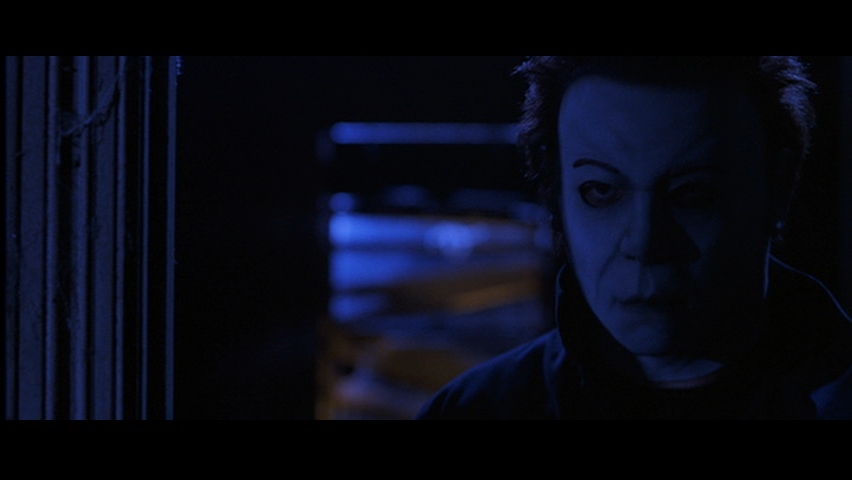 Ramonesome: A year after Laurie’s murder a reality television show wants to film people as they spend a night in Myers house. Honestly it’s not the worst idea for a story. But after a few dozen references to the internet and emails in the first three minutes my eyes are rolling. There might be an exciting storyline about online snuff films or murder on the internet. This isn’t it.

knowbody: By the time H8 came out, there had already been numerous stories about internet killers. Check out Millennium’s “The Mikado” (1998) and Homicide’s “Homicide.com” (1999). Both of these works predate H8 by at least 3 years and were on television. So, to make a feature film that relied on the same gimmick was dead on arrival. H8 tried to be relevant by including email and live streaming at a time when services such as Napster had completely redefined what the web was capable of. However, had H8 presented itself as a serious found-footage endeavor we’d now regard H8 as a groundbreaking slasher film.

Ramonesome: The kids all seem to come from the same university, appear to be seniors and yet still need money for scholarships? Michael Myers is an at large killer and they’re going to spend the night in his house without security? Michael can walk around a small house, going up and down the stairs, and not be seen by the multiple cameras until the third act? How many murders will Tyra Banks miss because she was fixing herself a beverage? Why is Michael’s knife covered in blood before he’s even stabbed anybody?

knowbody: I could care less about the characters in this story, except for Sara. I like Sara because she was played by Bianca Kajlich. The Halloween series needed a young, female hottie at this point. Sure, Bianca can’t scream, but her character has spunk. Sara was smart and introverted, attractive but approachable, virginal but not afraid to kick some ass. Speaking of ass, Sara is presented as a long-haired heroine in the style of Laurie Strode in her prime (which stands in contrast to Rachel from H4/H5 and Jamie Lee Curtis in H20). This means that H8 has no gratuitous shots of Sara’s cleavage and no sequences showing her derriere in tight jeans (it’s disappointing because Bianca is all that and a bag of chips!). 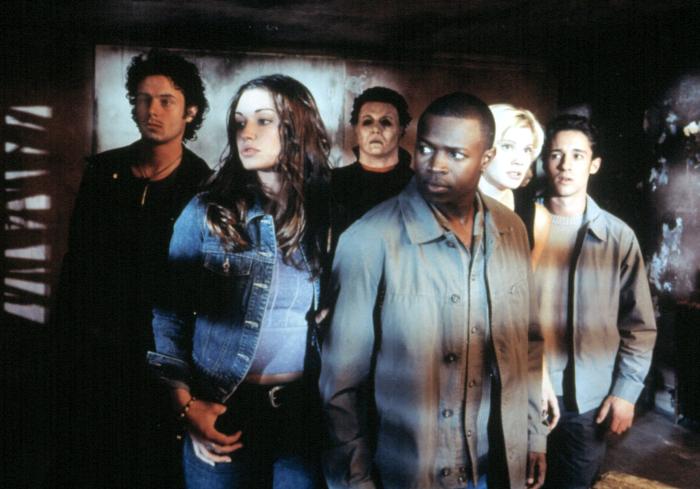 Concerning Michael Myers, who would’ve thought that he was still living in his old house? The thought never occurred to anyone (not to Laurie, not to Dr. Loomis and not to the authorities as per H20).

Ramonesome: Part of what made the original house so scary was that it was ordinary and could be on your block. Now that’s undercut by the ridiculous idea that Myers house is connected to labyrinth network of tunnels complete with a manhole cover in the garage. The Haddonfield City Planning Department is about as effective as the police department.

And what does Michael Myers want here? If he wants to protect his home then all he has to do is NOTHING. If he can stay out of the way while they’re filming he’ll have the place to himself again the next day. If he kills every one of them the police will come and chase him out of his home (actually it should have been torn down years ago).

He has no plan, no purpose, or a consistent MO. The victims in this film stand still and wait patiently while their heads are crushed, their throats pierced and heads decapitated.

Decapitated heads were never part of the Halloween series and this one serves up two. The tripod kill is a rip off from the slasher classic Peeping Tom. The action is turgid, the acting insipid. Forced homage’s to previous sequels remind us how much were missing.

knowbody: Michael Myers is a killing machine, but he could have left all of those morons alone, I agree. Had this film been what Busta Rhymes said it was going to be (an exploration of the Myers house and Michael’s childhood), this story could’ve been interesting. Turns out that Busta was lying through his teeth.

Halloween 5 and 6 already established a link between Michael and his childhood home. Halloween: Resurrection provides Michael with the same motive for killing people as in Halloween 6 (i.e. Myers simply kills anyone who is in his house). It’s pretty lame for a sequel in a new timeline to borrow/steal from a sequel in another timeline.

Dangertainment seems to have equipped the Myers house very well. My question is, how come Michael Myers allowed the Dangertainment crew to set up shop in his house? If Myers is killing people in the house, why allow Dangertainment in at all? (and don’t tell me that Myers was away while Busta and company stocked the house full of cameras and fake props). 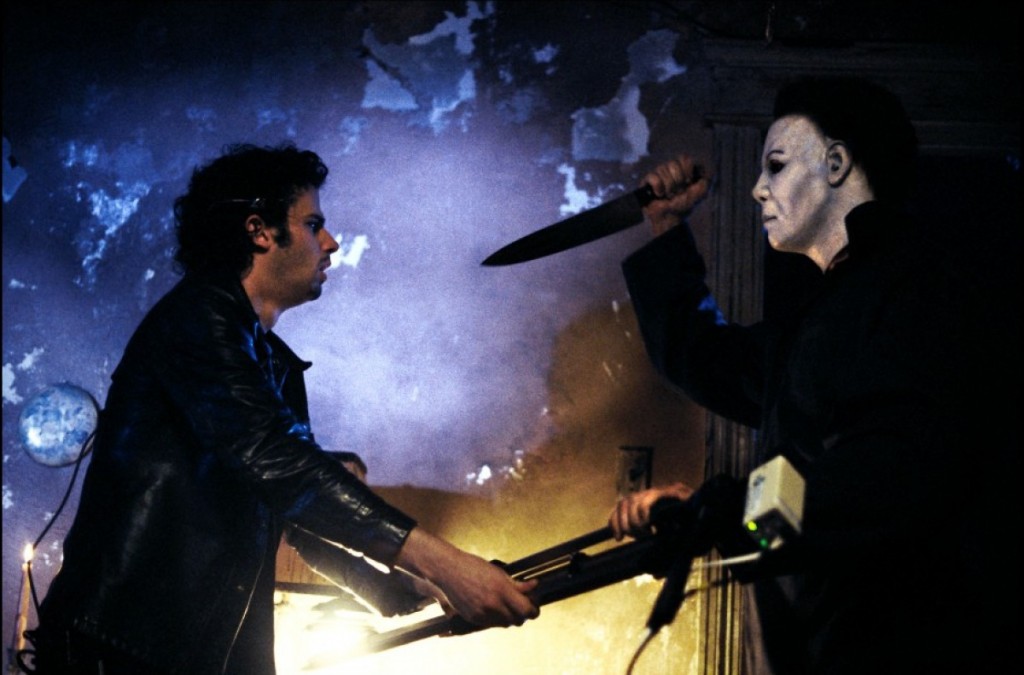 Another question I have is, why the hell can’t anybody get out of the house? None of the contestants can find the front door. No wonder Myers went insane as a kid. His house is a confusing maze complete with trapdoors, subterranean apartments, a spacious attic and a secret room with a one-way mirror.

Ramonesome: Here Michael Myers takes electric current to the nuts, karate kicks to the head, chainsaws to the chest and is lectured by a failed rapper turned failed actor. He’s treated like a joke by filmmakers who are tired of him. And by the end so am I. 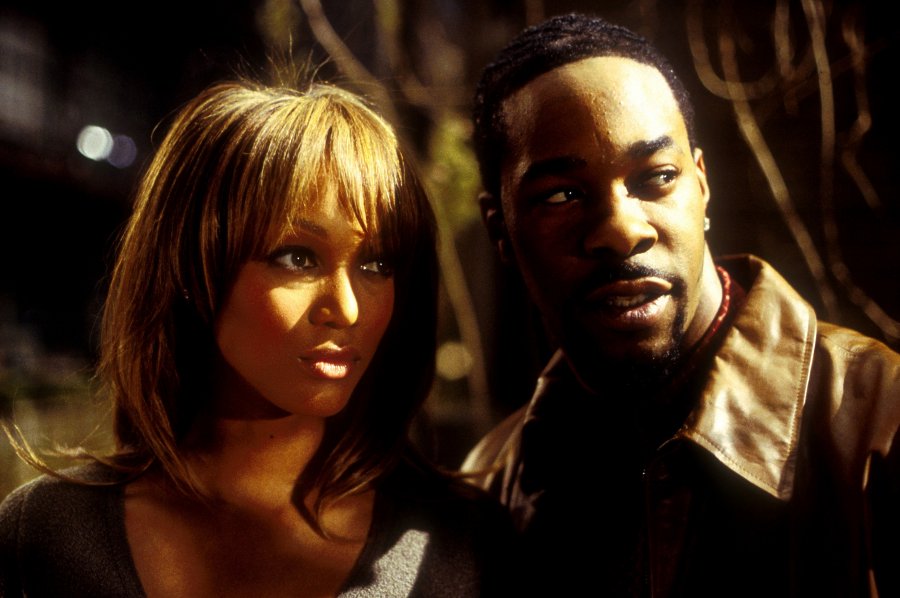 At its best the Halloween series was a trend setter in horror. At its worst the series chases after its own imitators in a desperate attempt to stay relevant. Here the producers knew they were creatively bankrupt and tried to hitch their wagon to the Blair Witch Project, which had come out two years previous. The result is a film that was tired and dated before the negatives were struck.

knowbody: What a horrific way to cap off this alternate continuity in the Halloween franchise. Halloween: Resurrection was lacking in scares, ideas and direction. H8 felt like Halloween: The Next Generation, with Sara coming in for Laurie and Busta Rhymes stepping in for Loomis.
After the box office success of H20, you’d think Dimension Films would get a decent actor to portray the hero in H8. Why did they opt for Busta Rhymes of all people? He’s enjoyed success as a rapper, but never as an actor.

H8 looks and feels cheap all around. The soundtrack is thin; the cinematography is as colorful as the Batman TV series from the 1960s; the actors suck; the dialogue is hilarious; the settings feel cramped (especially the fake Myers house). For someone who should’ve already been familiar with the original vibe of HalloweeN, director Rick Rosenthal dropped the ball big time with this one. 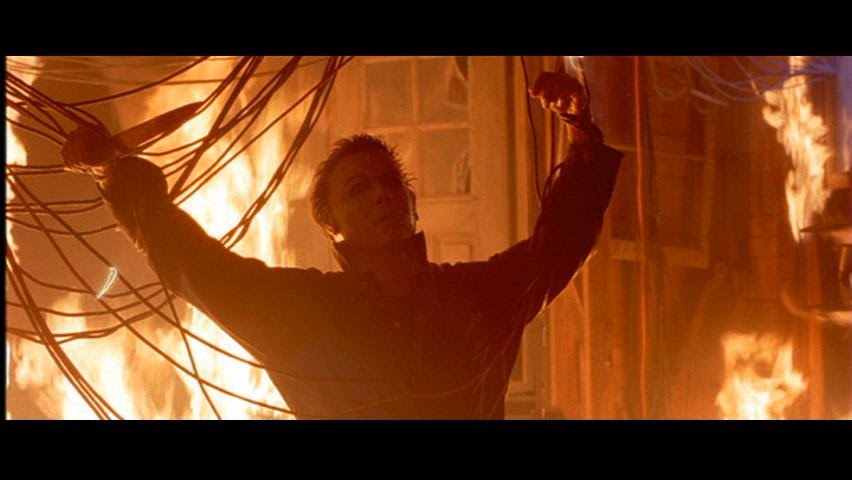