Two young men, Nico and Steven, leave Los Angeles to cross the border into Tijuana, Mexico. They’re seeking some fun and they videotape their journey with a cheap camcorder. In the early-goings of 2011’s Hellraiser: Revelations, the film uses elements of found-footage. However, the found-footage is a red-herring as most of the movie is shot in standard fashion. 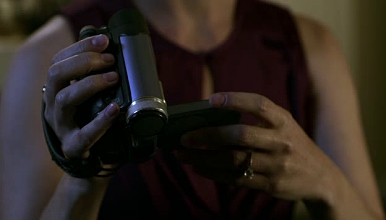 The two best friends inevitably come into contact with a Puzzle Box and unleash a knock-off version of Pinhead. As pointed out by the real Pinhead, actor Doug Bradley, in his interview with Rabbit In Red Radio, he didn’t play the character in this film. A bald actor named Stephan Smith Collins played Pinhead in this ninth entry in the Hellraiser franchise.

Surprisingly, Hellraiser: Revelations isn’t the worst movie in the history of cinema. It has its moments. The gore, ripped flesh, blood, hooks and the female Chatterer cenobite all look great. But, Smith Collins’ rendition of Pinhead ruins everything. I never thought that Pinhead would ever come to ruin a Hellraiser movie.

The Pinhead in Revelations goes to show that not any bald dude can play the part. There’s something else involved called acting. Doug Bradley successfully and memorably portrayed Pinhead as a character caught in between the extremes of pain and the extremes of pleasure. Smith Collins is unable to convey that emptiness. To put it simply, the Pinhead in Revelations is not Pinhead. Moreover, the Revelations Pinhead has dumb make up which makes him look fat; he has a stupid look in his eyes; and he wears a costume that looks like plastic Batman armor. 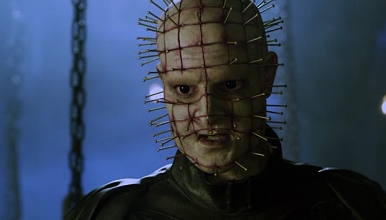 Long-time Hellraiser make up effects artist (and sometime second unit director) Gary Tunnicliffe wrote the script for Revelations. Tunnicliffe knows the Hellraiser mythology very well. He incorporates such elements as the Pillar of Souls, lots of dangling hooks, the idea that one can bargain with the Cenobites, and a story that makes generous use of the plot of the first Hellraiser from 1987. In Revelations, Nico and Steve develop an Uncle Frank/Julia-type relationship.

Tunnicliffe was smart enough to work within the contrivances of Dimension Films’ limited budget and short production schedule. Revelations has almost no exterior shots, no explosions and no car chases (almost no cars, in fact). The movie’s final acts take place in the same location: a family’s living room. Too bad the directing style and dialog aren’t enough to maintain any sense of intrigue or suspense. 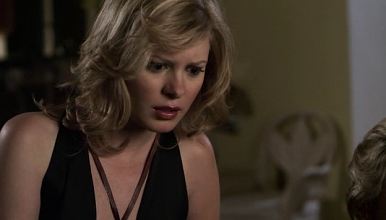 Most of the acting is half-decent. However, the character of Emma, Steven’s sister, is atrocious. When confronted by her dad about the missing young men, Emma responds, “Please what, dad? Please forget that I had a brother? Please forget that my boyfriend disappeared with him?” Emma delivers those lines, and indeed all of her lines, with complete indifference and an emotionless face. The musical score doesn’t help matters either. It is extremely generic and sparse.

Hellraiser: Revelations will make you appreciate such questionable films as Hellraiser: Inferno (2000) and Hellraiser: Deader (2005). Doug Bradley’s Pinhead, no matter how briefly he appears in the direct-to-video sequels, is what makes those films worthwhile. The reverse is true for Revelations, however. “Pinhead,” for the first time ever, is the weak point in a Hellraiser flick. It’s a good thing that this movie lasts only 70 minutes (without the 5 minutes of end credits).