The Masks And Mysteries Of Halloween 4: Part II 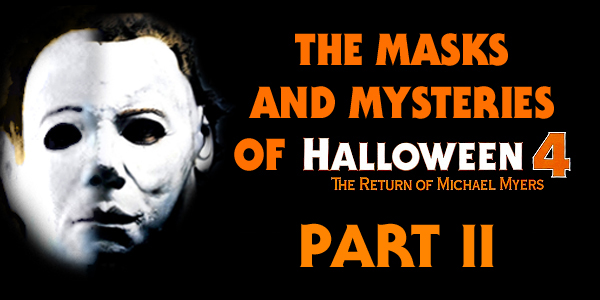 Diving back into the swirling madness surrounding the masks used in Halloween 4: The Return Of Michael Myers, it’s time to look at some more oddities and try to make sense of it all. In this article, we will deal with the Michael Myers masks that appear in Halloween 4‘s Discount Mart scene, the mask that smashes against the windshield of the truck, and the mask on the poster for H4.

The masks seen in the Discount Mart when Jamie is searching for a costume are another unexplained mystery. The first mask (left) appears in the back behind Jamie. It appears very close in style to the hero, although the hair looks quite thin. Arguably the most noted oddity after the unconverted mask seen in part I, the partially converted mask (right) has possibly the smallest eyeholes seen on a screen-used mask. The bulbous featureless area surrounding the eyeholes are a similar shape to the huge eyeholes on the Don Post mid-Eighties ‘The Mask’, again suggesting a recast. Whether it’s brown spraypaint or revealed skin tone, the hairline and nose have stains on them. These masks also lack the neck extension worn on the hero.

Although it is pulled firmly over actor George P. Wilbur’s face, this mask simply doesn’t fit him even with the neck extension and the large eyeholes. It stretches comically over his face, either due to being too small in size or due to the bandages wrapped around him. However, the resulting effect is quite creepy and actually makes the mask look more like the Halloween 5 mask by KNB.

Used when Michael smashes his head on the windscreen as Rachael and Jamie try and escape, this stunt mask is worth a mention. Its stretchy nature is seen when it rubs against the windscreen, distorting the eyeholes. The hair is worth noting here as like the ‘stretchy’ mask, it is much more wild than the hero.

Whilst not appearing in the film itself, this mask is commonly remembered for being on posters and home release covers. In the tradition of many Eighties films, the poster was artwork rather than an actual picture. It was an almost exact copy of a photo of the hero from the first two Halloween films, and this photo was used on the cover of the Halloween 4 novel. The artwork coloured the eyebrows in brown unlike the original mask. The mask artwork was slightly altered and more shadows were added when it came to the poster for Halloween 5: The Return Of Michael Myers.

That about wraps up the notable variations throughout Halloween 4! I hope these articles have been an enjoyable read and if anyone has any more points to raise that I may have missed, raise them in the comments!