The Masks And Mysteries Of Halloween 4: Part I 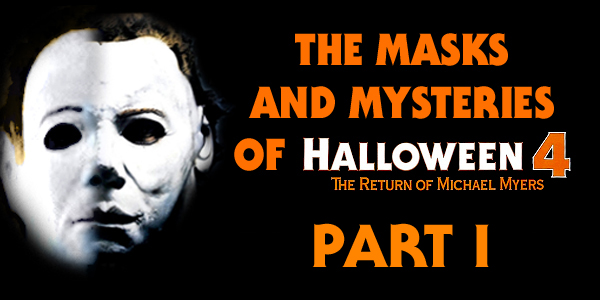 Halloween 4: The Return Of Michael Myers marked the return of the malevolent stalker after Halloween III: Season Of The Witch failed to change the course of the series. With the success of celluloid slasher icons Freddy Krueger and Jason Voorhees, Myers was pulled out of his fiery retirement and Halloween 4 became a success. However, twenty four years after its release, fans are still confused and mystified by the varying masks that appear throughout the film. Arguably, Halloween 4 is the last entry in the series to feature a mask based on William Shatner’s likeness, although it looks wildly different than the masks used on the first two Halloween films. Many fans of the series are eager to understand where the mask came from, why there are various differences in it throughout the film, and how many masks appear.

The story goes that there was an unconverted Captain Kirk ’75 left over from Halloween II which the makers of Halloween 4 acquired and began filming with. However, someone noticed that the Myers mask didn’t have blonde hair and a tan, and somewhere along the way it became converted to resemble the mask from the first two films. However, the Halloween 4 hero mask shares strong similarities in features to the Don Post Myers masks of the mid Eighties and is possibly a re-cast of a previous mask, whether that be a Captain Kirk or ‘The Mask’, the name given to licensed Myers masks. Whilst I (or seemingly anyone for that matter) can’t offer any real answers, I will look at the most strikingly different/unusual variations of masks seen in the film and try to make some sense of the mysteries surrounding them.

The most commonly used mask in the film is of course the ‘hero’ mask, hence its name. However, even this undergoes some changes over time, both in the film and in the real world. In some scenes, most notably the death of Brady, the eyeholes are quite small (left). Stuntman George P. Wilbur who portrays the Shape in both this and Halloween: The Curse Of Michael Myers says that they hindered his vision, something essential not only for acting but for performing the action scenes and stunts required of him, so he took a pair of scissors to the eyeholes and made them larger (centre). Over time the mask has obviously shown signs of ageing (image by user crofader, right), and with this comes some confusion. As the white paint flakes away and the colour comes out of the hair, it’s clear to see the mask was originally skintone and the hair was originally platinum blonde. However, the ‘hero’ doesn’t have the features of a ’75 Kirk, which seems to contradict the story told by Ken Horn, who was interviewed by Gorezone about the film. In the interview he apparently said that the unconverted Captain Kirk left over from Halloween II was recast and many were made. The neck extension visible in the centre picture was apparently added due to the shrinking of the recasts, although another story is that the recasts were larger than the Kirk to accomodate George P. Wilbur’s head shape. As you can see, multiple stories and contradictions make finding out the truth near impossible. Danielle Harris, child star of Halloween 4 and Halloween 5: The Return Of Michael Myers, has also apparently said that a mask originally had a flesh tone and platinum blonde hair and was often spray painted.

The most notable of variations in Halloween 4, this mask bears a skin tone similar to the ’75 Kirk, and platinum blonde hair. At first glance, especially with the small eyeholes, it is easy to say that this is a ’75 Captain Kirk. Whilst the mask has strong Kirk features and evokes both a Castle and Warlock vibe when worn, the ears are notably different to a Kirk and more akin to an early-to-mid Eighties ‘The Mask’. The ’75 Kirk had larger ears than ‘The Mask’ which has smaller ears. Again, it’s too difficult to explain where the mask came from or if it’s the hero before conversion. Another story floating around the internet ether is that Don Post Studios made masks for Halloween II, which could explain both its unique combination of Kirk and ‘The Mask’, as well as it coming from the set of Halloween II. The story behind its inclusion is that the schoolhouse scene where the mask appears was too expensive to reshoot entirely, so the unconverted mask had to remain in the film.

Used when Michael thrusts a shotgun through Sheriff Meeker’s daughter Kelly, this mask seems markedly different from the hero, although lighting is at play here. It shares a similar shape to the unconverted mask, as well as seemingly identical hair, although certain features seem to remove the possibility of it being a Kirk. Along with the ears, the eyebrows are quite different to those sculpted onto a ’75 Kirk, and are more akin to the sad/surprised eyebrows of the hero and seem almost identical to the very rare Don Post 1984 ‘The Mask’. Its facial features are also similar to the ’84 and it certainly evokes a more Castle-Warlock vibe than the hero.

As you can see, there’s no easy route to the origins behind the masks used in Halloween 4, and until someone steps forward to let the fans in on the truth, all we can do is speculate.

Stay tuned for Part II, where we look at the Discount Mart masks, a stunt mask and the poster art mask!