Michael Myers has been scaring people and causing nightmares for decades. However, Myers has been doing the exact opposite when it comes down to marketing his products. The stock images that have been used to promote such things as Myers masks and figures have been comedic and, at times, confusing.  Some Michael Myers fans have also used extremely poor judgment in representing our favorite character. 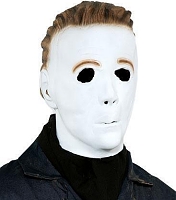 There’s plenty to complain about here. The eyebrows are not menacing.  The eye cuts look like they were done by a nervous, right-handed 11 year-old using scissors meant for left-handers. The latex hair is full douche.

What bothers me more than the mask is the attire the model is wearing. October may be a bit cold, but since when did Myers begin wearing denim coveralls and a turtle neck sweater underneath?
In any case, if you’ve ever wondered what Myers might have looked like back in the 1950s, here you go. 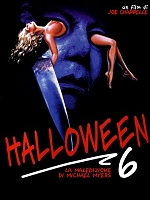 It’s always interesting to see how other countries market the HalloweeN movies. This poster for Halloween: The Curse of  Michael Myers comes to us from Italy. Since it’s an Italian design, some flamboyance is to be expected.

However, I cannot recall the scene where a naked blond vixen wound up inside a giant version of Michael’s mask. The sequence must be in yet another CUT of this film that we have yet to discover.
At the top right corner it says, “A Film by Joe Chappelle.” How is that a selling point for any movie? That’s something you don’t want the public to know.

While cruising eBay one night, I came across this. It’s the mask profiled at the beginning of this article. Judging from the rest of the costume, someone’s been trying to shoot two birds with one stone. It’s a Myers mask with a Jason Voorhees torso. It’s a hybrid of the two characters because I surely don’t remember ever seeing Myers’ chest torn open and bloody ribcage exposed (but maybe there’s an unknown cut of Halloween 6 that shows that, too).