A long-standing member of our community (username: Sheriff Brackett) posted photos of a very rare, first ever version of Don Post’s “The Mask.” Our members at Michael-Myers.net are very familiar with the 1985 version of The Mask but this appears to be an even earlier version which was very limited in production in 1984.

I thought I knew early Myers history pretty darn well until today. I had no idea this mask even existed until last week. The rarity of this mask nearly ensured it was forgotten and wiped from history altogether. This was released by Don Post Studios in 1984, a year before the flesh-colored resculpted version in ’85, and is the first “The Mask”. Not sure how it was sold as I would imagine there’d be more of them around had it been mass produced. Maybe just a few prototypes were produced for advertisements? It appears to be a pressing of some sort of the original 75 Kirk due to the identical features (lips, cheeks, ears, etc.) but it’s smaller in size. It’s the classic 1980s Don Post latex, paint work and hair. This is the first time I’ve seen flesh color show through the white as much as it does on this one which gives it a nice look. Just like the original 75 Kirk mask, this one has no stamp or date of any kind.

He is in near mint condition. He was stored well, has a full head of hair and has no rot or warping of any kind. I really like how the facial features look on the mask. Had I ordered this back in 1984 and received this I would have thought it was amazing. What a neat and obscure mask. 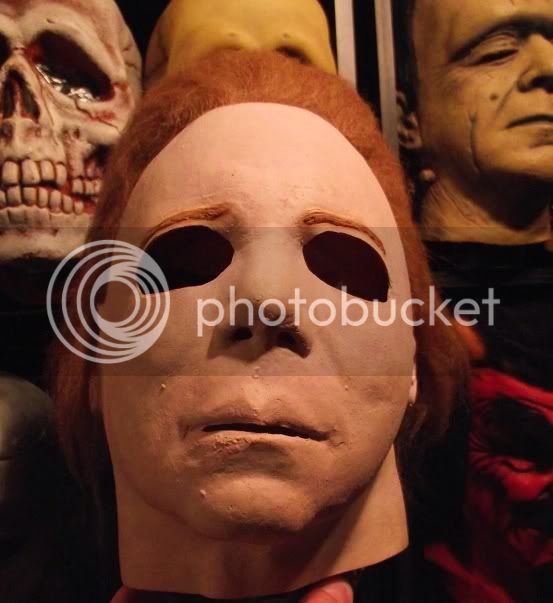