I have been waiting for what seems to be the longest year ever to see this film. It has been talked about over and over and Kevin Smith did a Q&A showing. I never had the chance to see long clips or hear a real review. Well my friends, the wait is all over. I have seen Red State and it goes like this……

The movie wastes no time in setting up. You are introduced to the three young boys almost instantly, then within minutes you see that their goal is to simply get laid. A very simple plan that soon back fires through a crazy chain of events. 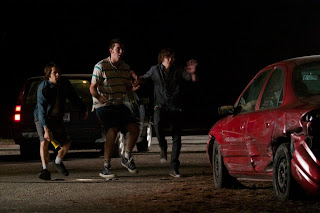 Michael Angarano (Travis), Nicholas Braun (Billy-Ray) and Kyle Gallner (Jarod) are the three boys in the film. Each one delivers a stellar performance that is note worthy. It’s amazing how real their performances felt and it only draws you in that much more. Out of the three I think Kyle Gallner delivers some of the most gut wrenching suspense in a scene I have ever felt while watching a film. Michael Angarano however, will have you so on edge you’ll want to yell at the screen.

The ringleader of this whole twisted circus is Michael Parks (Abin Cooper). Parks is the only person I know of to play the same character in five different movies (Earl McGraw). Now why he hasn’t been in more films I don’t know, but after this he should get an Oscar. Parks delivers the most stunning performance of the whole film. He gives new meaning to the word crazy. The way he delivers his lines as Abin is just so ice-cold-dead that you would believe this is a real religious fanatic and not an actor. I honestly can’t believe it and am still in awe of his performance.

If Parks get an Oscar then John Goodman (Joseph Keenan) should receive best supporting actor. If Goodman wasn’t playing this role I don’t think it would have been anything to talk about – it would have been just your average ATF agent character. Not only does Goodman bring his A game, he owns the entire third act.

This film was everything Kevin Smith promised it would be. It was a solid blend of horror and action. Every death felt real and was not over-the-top. It had a sense that this could really be happening right here, right now and that’s exactly what I wanted.

What seals the deal on this masterpiece is not the blood, death and violence. It’s the characters and their story. Add to that an ending that hits you like a mack truck you didn’t see coming and the rest is movie history. Kevin Smith has done something I never thought possible – he jumped genre’s and delivered a movie that is on par with a Quentin Tarantino film.

If you have the option to watch this do it. There is no way you can watch this and not think “what the hell just happened!”