When one speaks of the HalloweeN franchise, two main villains come to mind. The first, of course, is the masked killer Michael Myers. The second is Tina Williams. Michael Myers was a fictional character who struck fear into the hearts of every citizen of Haddonfield. Tina Williams, however, was a real person whose purpose was to bring down the HalloweeN series from the inside. … Continue reading →

With the announcement that all of HalloweeN‘s early sequels will be hitting blu-ray later this year, let’s go back to 2008 to revisit another release. Billed as a “6 Disc Collector’s Box,” this HalloweeN 30th Anniversary Commemorative Set was put out by Starz Media/Anchor Bay Entertainment. This item was limited to 20 000 copies and each box had a unique number. However, this set doesn’t appear to have gone out of … Continue reading → 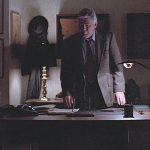