Haddonfield Citizens: The Hermit of Halloween 5

Listed in the credits as “Mountain Man,” the unnamed Hermit in Halloween 5: The Revenge of Michael Myers resided on the outskirts of Haddonfield. He lived with a parrot named Snookie and a serial killer named Michael. The Hermit’s cabin was located close to an old mineshaft that was covered by quicksand. Away from the hustle and bustle of Haddonfield, the Hermit chose to carry out a … Continue reading → 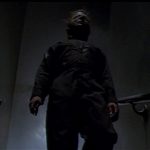