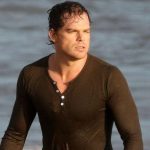 Dexter spends the night floating in the Gulf of Mexico clinging to a piece of his destroyed dingy. Miraculously he is picked up by a boatload of Cubans being ferried to Florida. When the ships captain robs his passengers and threatens to rape a refugee Dexter delivers a harpoon through his chest. Driving them to the coastline Dexter gets the … Continue reading →

Dexter 6.11 “Talk to the Hand.” There are two severed hands at play in this season’s penultimate chapter, which would be enough to give it two thumbs up if I weren’t afraid to be sued. Dexter’s anonymous 911 call from last week brings the Miami Metro fun times gang to the Ricochet Rabbit, equal parts pleasure boat and crime scene … Continue reading →

This episode opens with an unintentional howler when Dexter’s inner monologue compares his Dark Passenger to a clubfoot. Which might explain the dragging sensation one feels in regards to Dexter’s pursuit of Gellar. In the abandoned church Dexter frees Travis from his chains and the two search for clues as to where Gellar may strike next. Hidden in the Bowls … Continue reading →

After abandoning his sister and job last week for a murderous road trip, Dexter has some apologizing to do. Over conciliatory coffee and donuts, he lies about where he went and, of course, what he did. Oh, and he needs the morning off for Brother Sam’s funeral. “Funerals and donuts” Deb says shaking her head in disbelief “you’re really good.” … Continue reading →

Having nothing to do with the classic Springsteen album, this episode opens with Dexter and his dead brother, Brian, dispensing limbs into the gulf. Brian is urging Dexter to give into his bloodlust, “you don’t turn the other cheek, you slice it”, when Debra, “the one who got away” interrupts their debate. Dexter quiets his imaginary serial killer brother to … Continue reading →