October 31, 2019 · All About Michael Myers, Analyzing the HalloweeN Films · 0 Comments 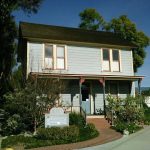 Halloween is my all-time favorite Horror movie and being from Chicago, I was in awe of the fact that the movie took place in Illinois. I remember thinking, “Where is Haddonfield, Illinois? And if it doesn’t exist, in what Illinois town did they shoot this movie?” It wasn’t long before I discovered that the movie was shot in West Hollywood … Continue reading →

Dr. Loomis, as played by the great Donald Pleasence, went through several characterizations over the course of five Halloween films. Halloween (1978) presented us with a serious and restrained Dr. Loomis. He gave his take on Michael Myers’ nature with memorable lines and speeches. Hearing Loomis, a man of science, speak of evil and the devil was both unexpected and … Continue reading →