It was a busy Monsterpalooza this year. The turnout was very strong for the three-day event held in Burbank, California between April 12 and 14, 2013. There wasn’t that much directly related to Michael Myers and HalloweeN this time (aside from the Nightowl Productions table). Other horror classics, in particular The Shining and Jaws, were well represented with some wonderful … Continue reading →

Horror fans are showing up like never before at conventions this year. Much like with the previous Monster Mania 24, the fans came in droves to the recent Horror Hound Weekend held in Cincinnati. Overall, the event was described by some attendees as disorganized and too crowded. The long line-ups and some of the prices for autographs were also a … Continue reading →

Monster Mania 24 was celebrated between March 8th and 10th of this year in Cherry Hill, NJ. The turnout for this horror convention was massive. It’s possible that this was the busiest Monster Mania in its 10 year history. Part of the reason for the large crowds is the mainstream popularity of the television show The Walking Dead. Monster Mania … Continue reading → 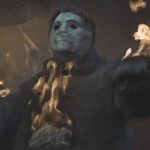