The many masks of Michael Myers

A member of our community (username SlipKnoT) posted a thread in the forum about the many masks of Michael Myers. I found it to be a fun and interesting read, which prompted me to re-post it here on the blog. From H1 through Rob Zombie’s H2 remake, we have seen the Michael Myers mask change and evolve each film.

HalloweeN: The mask used in HalloweeN 1 was a store bought mask – the Captain Kirk mask. Sculpted from a life-cast of William Shatner in 1975, and sold in stores from 1976 to around 1979. The mask used was bought from a Halloween store, had its eyes cut larger, eyebrow and sideburn hair removed, the hair misted brown, and lastly, the mask was painted white by Tommy Lee Wallace. The mask was worn by Nick Castle, and was worn by Tony Moran in the unmasking scene. It was also worn by various crew members.

HalloweeN II: The mask in HalloweeN II was the same mask used in HalloweeN I. After filming H1, Debra Hill kept the mask very poorly under her bed. Because of the poor condition it was kept in, the mask discolored severely and that’s why it looks the way it does, aside from the fact that Dick Warlock (Myers, H2) had a shorter and wider face than Nick Castle (Myers, H1). Dick Warlock wore the mask.

HalloweeN IV: The mask used in H4’s origin has been argued. There are many theories about the origin, most commonly that it is a recast/retool of the 1984 “The Mask”, made by Don Post Studios. This version of “The Mask” was never licensed or trademarked, making finding them next to impossible. It should also be noted that this mask didn’t have eyebrows sculpted on – they were glued in place. The mask also had white hair placed on first, before it was misted black. The mask was worn by George P. Wilbur.

HalloweeN V: This mask strays from the original design because the director wanted Michael to have an “angrier” expression as opposed to the “blank” and “featureless” face we saw in previous films. When filming a scene, Pleasence (Dr. Loomis) accidentally hit Don Shanks (Myers, H5) in the nose, breaking it. As a result, they had to cut out the nose of the mask and add on a paper thin nose cut off of another H5 mask. The edges of the nose appliance can be seen clearly in a lot of the film. Don Shanks wore the mask.

HalloweeN VI: The HalloweeN VI mask had a very odd goblin type look to it. This mask was sculpted by John Carl Buechler. The mask used in H6 had chemicals rubbed inside and outside of the mask by a disgruntled effects artist, thus destroying most existing copies. This is what made the mask look different in the ending, and re-shot scenes. This is the second time the mask was worn by George P. Wilbur. 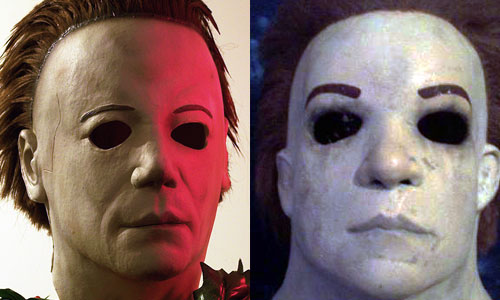 HalloweeN H20: There were a total of 4 masks used – an H6 mask, retooled by Brad Hardin, used in the opening scenes and a KNB mask, used for most of the primary shooting. As they were wrapping up production it was decided that the KNB mask wasn’t adequate. They hired the Stan Winston FX company to sculpt a new mask which they used to reshoot a lot of the scenes. Lastly, due to time or budget restraints they had to CGI over the mask in a couple of scenes. Chris Durand wore the masks. 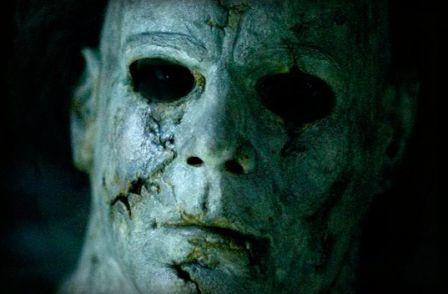 Rob Zombie’s HalloweeN: The mask was sculpted by Wayne Toth and worn by Tyler Mane. It was actually sculpted on a lifecast of Tyler Mane, giving the mask most of Mane’s features. Toth didn’t account for latex shrinkage so the mask was very tight. In the scene where Michael first puts on the mask you can see where he goes from having the long wig hair to his natural short hair. Because of this, Toth actually had to glue hair inside the neck of the mask, to make it seem like Mane still had long hair under the mask. This is the very first mask to stray beyond just a “white face,” as this mask has a lot of “rot” and “deterioration” combined with shades of black, gray, and green in various places. 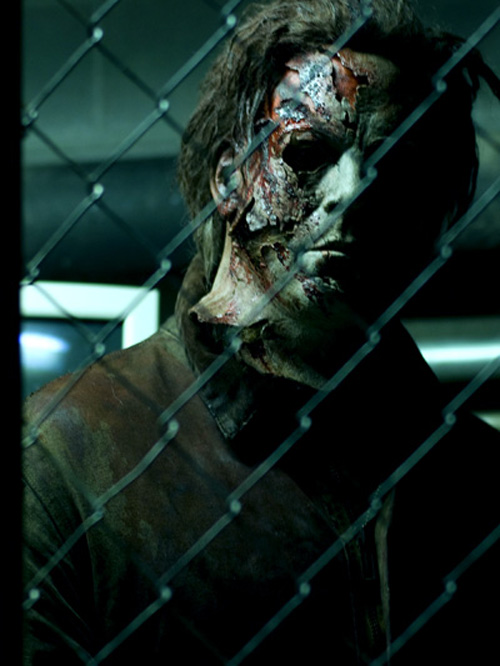 Rob Zombie’s HalloweeN II: The mask was again sculpted by Wayne Toth and worn by Tyler Mane. It was again sculpted on Mane’s life-cast, making the mask have strong Mane features. Toth sculpted this mask bigger than the H9 sculpt, so the mask would fit Mane more comfortably. As the time goes on the mask deteriorates further, till the point it is just a dirty brownish mask. Michael gets slapped and it causes a part of the mask to rip off, which causes the “Exposed” look we’re all so familiar with. This is the first film to have Michael’s face exposed through most of the movie.