This is truly a sign that the new generation of movie goers know nothing about quality horror films. They will go in droves to a film that portrays vampires as tame, but ignore a totally original take of one of the greatest vampire movies ever made. Really? People are that dumbed down that if it isn’t “happy horror” or a remake of a foreign film it gets no love. This is a sad state for movies in general and I blame the parents.

Fright Night is the most original remake since Zombies Halloween. Weather you like it or not they are original ideas, just using pre-existing characters. That my friends is what remakes should be.

The movie wastes no time setting itself apart from the original. We are introduce to a Brewster who is now popular, has the hottest girlfriend, and wants no part of his best friend Ed’s overactive imagination. Then in another five minutes of that we get to meet are new Jerry and this guy is the definition of a predator.

Fright Night is filled with suspense and takes you on a ride that you did not expect. This time Charlie is not seen as the over dramatic boy with an imagination, but as a man who knows that he must protect his family.  Anton Yelchin does a spectacular job as Charlie Brewster and delivers a performance that is set far more in reality than one would have expected. Christopher Mintz-Plasse portrays Evil Ed as he should be – a dork who hasn’t grown up but wants to and sees Jerry as his key to salvation. It’s weird, but the story itself feels more real than its 1985 counterpart. That’s hard for me to say since I love that one so much.

Now the highlight of this film is the one and only Colin Farrell who gives a vicious portrayal of Jerry Dandrige. There is no better way to describe him than as the shark from Jaws. This is how a vampire is meant to be: a dark, hungry, carefree killer. If you’re immortal this is how your outlook should be. You literally have the world at your finger tips and the ability to do anything.

The most surprising turn in the movie was Peter Vincent (David Tennant). Not only is the character perfect for this day and age, but he has an awesome back story that ties him in with vampires all to well. This was the character that I was most worried about, but he turns out to be a great addition to this film.

The movie does go heavy on CG but it is pulled off very well. I’m usually not for this but it is mixed with a touch of practical FX here and there which balances out nicely. 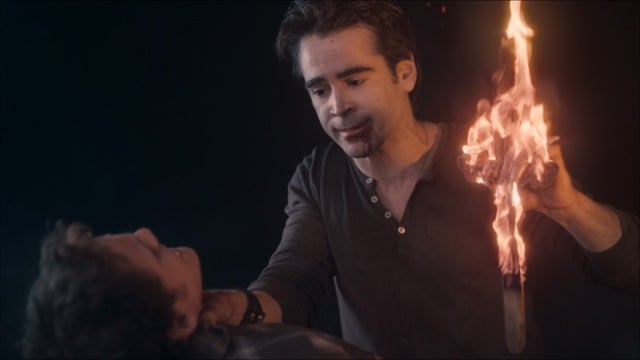 This film is what I want from all remakes. An original, new take on a great story and nowhere is that more evident than here. If you don’t check this out you are really missing out. If you were afraid that it was going to trash the original, it doesn’t. This is a film that old and new fans can enjoy watching.