Alone In The Dark with Dr. Loomis and Jason Voorhees

Alone in the Dark (1982) has a dream team cast. It stars three legendary actors: Jack Palance, Donald Pleasence and Martin Landau. This movie, directed by Jack Sholder, came very close to adding another noteworthy feature. One of its characters, a psychopath called Bleeder, wears a hockey/goalie mask to hide his face. Bleeder murders someone by raking him across the chest. Friday The 13th Part 3 was the first film to feature Jason Voorhees wearing a hockey mask. It beat Alone in the Dark to the theaters in 1982 by a few months. The question is: Which story came up with the hockey masked killer idea first? 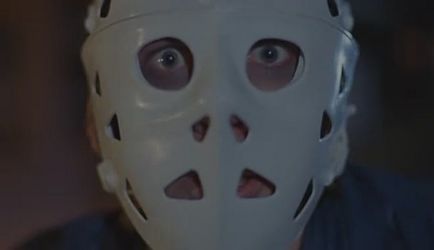 Fresh off his role as Dr. Loomis in the first two HalloweeN films, Donald Pleasence gets the chance to play another psychiatrist in Alone in the Dark. Pleasence plays Dr. Leo Bain, an eccentric man in both his behaviors and his beliefs. Dr. Bain runs The Haven, a mental hospital that offers treatment to the untreatable. Dr. Bain’s methods are unorthodox but he gets results. For better and for worse, Bain understands the deviant mind too well. He has established close relationships which each of his patients. Even with the patients on the third floor – the psychopaths. 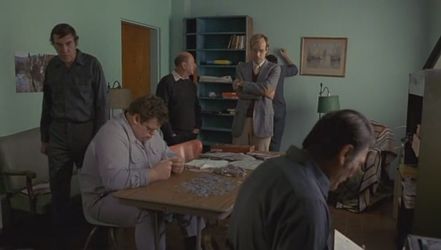 Among the psychopaths, we meet Hawkes (Jack Palance), Byron (Martin Landau), Fatty and the aforementioned Bleeder. It is Bain’s contention that “psychopaths” are the way they are because society is crazy and harmful to individuals. Bain believes that violently crazy individuals should be protected from society, not the other way around. The more conventional Dr. Dan Potter is hired by Bain to replace Dr. Merton who has been transferred to another hospital.

Hawkes’ paranoia leads him to falsely believe that Dr. Potter got the job because he killed Dr. Merton. Hawkes tells Byron, Fatty and Bleeder that they all have to “kill him back.” Thanks to a citywide blackout, the hospital’s special security system is rendered useless. The four psychopaths escape and kill some people on the way to Potter’s house.

The film has a quirky and dark sense of humor mostly because of Dr. Bain’s character. There is no trace of Dr. Loomis in the way that Pleasence portrays Dr. Bain. All of his scenes are memorable; his profound and thoughtful words are endlessly quotable. In one instance, Dr. Bain says to a psychopath who has wandered outside the confines of the hospital that, “I’m so glad this crazy outside world hasn’t disturbed you.” Most of Bain’s scenes end abruptly after he’s done talking. It’s a disturbing and effective technique that’s been used most notably by William Peter Blatty in his films The Ninth Configuration and Exorcist III.

During the blackout, Dr. Potter and his family are holed up in their house, terrorized by Hawkes, Byron, Fatty and Bleeder. Dr. Bain shows up and attempts to reason with his escaped patients. In one of the movie’s best scenes, Bain stands on Potter’s porch and tries to get his patients to come out of the surrounding darkness by yelling,

“Hey! Hey you. Hey! You guys out there… this is Leo – Bain! hahahe.
Why don’t you come out, we can explore a few things together!”

Upon hearing Bain’s plea, Potter laments, “It’s all over! He’s out of his mind!” Aside from the excellent humor, there are also great kills and thrills. Martin Landau comes across as genuinely twisted and diabolical. While Fatty is the very avatar of psychopathology. All of the film’s characters are well developed and written (including Potter’s witty young daughter). 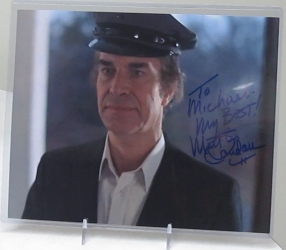 When I met Martin Landau last year, I immediately knew which photo I wanted him to sign. Landau is a remarkable man. An Academy Award winner, Landau has worked with the likes of Alfred Hitchcock. I chose to bring a photo from the movie reviewed here, Alone in the Dark, for Landau to sign. Upon seeing it, Landau, who has starred in over 100 films, immediately recognized the movie it was from and we spoke a bit about it. The photo shows Landau as the deranged Byron at Dr. Potter’s front door.