Cyrus: Mind of a Serial Killer is an independent horror film from 2010 that doesn’t tread new ground. It’s about a serial killer, obviously, and it purports to be “based on true events.” The story unfolds through three narrative devices: flashbacks; an interview conducted in real time; and interview clips from a news program called Last Steps. 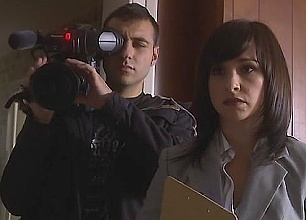 Danielle Harris (star of the Halloween franchise) plays Maria Sanchez, an investigative reporter for Last Steps. She’s on the verge of unraveling the mystery behind the country’s most prolific serial killer, a man dubbed The Highway Hunter. This man supposedly resided in the small, sleepy town of Arkham Heights. The killer is thought to be responsible for the disappearances and murders of about 200 female students over the course of many years.

A local man, Mr. Emmett (played by Lance Henriksen), has arranged to give Maria an interview. Emmett tells her that the killer’s name is Cyrus Danser and that he was his best friend. The movie then goes into flashback mode with Emmett serving as narrator. We are told that the killer, Cyrus, had an abusive upbringing. As an adult, he finally snapped due to a stressful event in his life. Story wise, there’s nothing new here.

Cyrus is a generic serial killer flick. The killer, Cyrus, is an amalgam of such real and fictional murderers as Henry Lee Lucas, Jeffrey Dahmer, John Wayne Gacy, Leatherface and Hannibal Lecter. In many ways, Cyrus is a character we’ve all seen before on the big-screen and on television. While most of the writing is predictable, there are a few sparks here and there. The point of view scenes where Cyrus hunts his prey with a shotgun are rather amusing. Meanwhile, a sequence involving a dead infant is somewhat creepy. 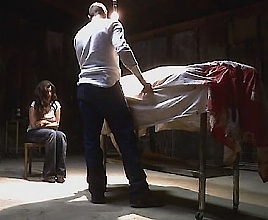 Having Lance Henriksen also serve as the narrator for the flashbacks was a brilliant move. Henriksen is a master at his craft. He is known for facial nuances and gestures that convey an array of emotions, but his voice is equally expressive and commanding. Another excellent decision by the filmmakers was to have Danielle Harris play a character her age instead of a teen. In Cyrus, Danielle plays a serious adult with a job.

Although I’m a big fan of both Henriksen and Danielle, and I loved seeing them both in the same film, I found it difficult to enjoy the story. Cyrus is been there done that fare. Furthermore, Henriksen and Danielle take a backseat to the main narrative (so much more could’ve been done with these actors). I do appreciate that the movie is exactly what its title says it is. Cyrus: Mind of a Serial Killer is the story of a serial killer… delivered with blood, body disposals and some torture.