This episode opens with an unintentional howler when Dexter’s inner monologue compares his Dark Passenger to a clubfoot. Which might explain the dragging sensation one feels in regards to Dexter’s pursuit of Gellar. 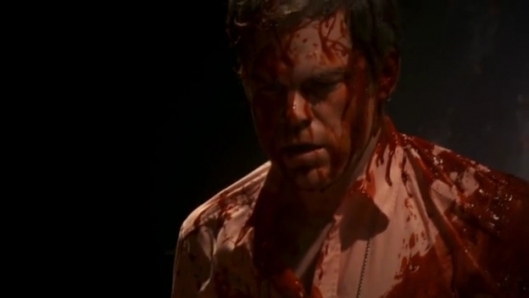 In the abandoned church Dexter frees Travis from his chains and the two search for clues as to where Gellar may strike next. Hidden in the Bowls of Wraith painting are clues that Dexter will enter into his super computer when he gets to his bat cave. Sidelining Travis until their next team up Dexter puts the fugitive up in a hotel. Whose credit card do you think they used for that?

Deb complains about Dexter to her therapist, who is surprised to hear that Dexter is adopted and that she was once engaged to his serial killer biological brother. The therapist rightly suggests Deb might want to come in twice a week. The morning briefing reveals that Professor Gellar, despite being homeless, has updated his blog. In addition to an end times’ countdown, a hidden plea is contained for Travis to return to the fold. Finally, the father of last weeks’ dead hooker comes to Deb and makes a plea for her case to be re-opened.

Quinn missed the morning briefing because he’s been drunk for 5 episodes. When Batista comes to get his idiot partner the two realize Quinn misplaced his gun and phone the night. Tracking the GPS in his phone to what he assumes is a stripper’s house, Quinn discovers instead he hooked with large 50-ish woman the night before. Much to Batista’s delight Quinn even took pictures of the tragedy on his phone. On their way back to Miami, Batista’s vintage Camaro breaks down, the two argue and then beat the crap out of each other on the side of the road.

Consulting with Travis and his search engine, Dexter deduces that an atheist professor will be Gellar’s next victim. Dexter impersonates a student and, exposing himself again, warns the atheist professor that he’s in danger. Unable to cover both the stairs and elevator to the atheists’ office Dexter reluctantly concedes he’ll need Travis’s help.
Staking out the campus offices, Dexter asks Travis why he would want to bring about the end times to which Travis asks “Haven’t you ever wanted a clean slate?” Travis spies Gellar striding into the university and the two spring into action. Travis watches the stairs while Dexter gets in the elevator, which quickly becomes stuck between floors. Realizing that Gellar has trapped him Dexter futilely attempts escape and is only saved when Travis separates the doors with an axe.

Blood on the floor of the atheist’s office informs the dynamic duo were are too late. Having botched his rescue attempt, and causing another person to be killed, Dexter dreams up another plan to catch Gellar. He has Travis post on Gellar’s blog hoping to convince him he wants to return.

In the morning the professor’s body is discovered on his classroom stage. He’s been drained of his blood, and one of his hands has been removed. Dex and the Miami Metro gang stand around the body wondering where the bowls of blood are. Dexter, remembering this scene from Carrie, looks up and spies them in rafter but is too late to warn Masuka who shifts the body causing gallons of blood and guts to rain down on the team.

Back at the hotel, Travis wakes from a nightmare to find the severed hand in his sink. It was used to write “Bring the false idol to the church” across his bathroom wall. Travis tells Dexter that Gellar contacted him and will be at the church that night but omits he has plans for Dexter.

After a breakthrough in therapy, Deb stands up to LaGeurta and reopens the overdosed hooker case. To no ones surprise, Mathews is revealed as the john. He and LaGeurta plan a super villain team up to take Debra down. Meanwhile, Lewis tracks down the IP ADDRESS of Gellar’s blog update. He was using wifi from a public park and if the detectives were to look behind them they might notice an abandoned church on the background.

That night Jaime and Lewis get together at his nerd palace apartment. His place is veritable museum of collectibles. While they’re getting randy we can’t help but notice Lewis has the missing ice cream truck killer’s prosthetic hand in a display case. And within seconds he suddenly becomes an interesting character.

Dex and Travis move in on the abandoned church. Travis from the front and Dexter from behind. Inside Travis relents and allows himself to be embraced by Gellar. In the back of the church ghost dad Harry asks Dexter the obvious. “Why are you doing this?” Dexter admits he wants to be a better father to Harrison that Harry was to him. He doesn’t want Harrison to inherit his dark passenger and helping Travis is a part of that.

Armed with his syringe Dex stalks the church, again, and discovers Travis has been knocked out but is still breathing. Dex finds a hidden passage in the floor and descends into a basement lair. And finally after nine episodes we have a scene between Gellar and Dexter. Kind of.

Dexter discovers the dead body of the professor preserved in a freezer, and realizes too late that Travis has been the killer all along. And with that Travis, presumably channeling Gellar, rises from the floor with machete at the ready to dispatch his “false idol.”

What the what? Gellar has been dead and in Travis’s imagination this entire time. It’s the obvious Sixth Sense twist that’s so obvious I didn’t expect it. Many other bloggers did though, as far back as episode 3.

How did that work then? When Dexter was stuck in the elevator Travis must have killed the atheist, stashed his body, gone back to the hotel with Dexter, and then gone back to the school and set up the tableau to be found the next day and then returned to the hotel with the severed hand (Masuka mentions the hand was cut off post-mortem). No wonder Travis sleeps in the next day, I got tired just writing that.

Looking back at the previous episodes this twist explains a lot, especially Dexter’s near misses with Gellar. I don’t recollect Gellar interacting with anybody else. Travis was driving the car that struck the first “whore of Babylon.” Also it was established Gellar liked sleeping with his brunette teaching assistants, something that didn’t fit the profile of the Gellar who condemned Travis for sleeping with the waitress. It also means Travis couldn’t protect his sister from himself, which is all kinds of tragic. It’s also clear from Dexter’s autopsy analysis and testimony from the escaped “whore” that Travis is really torn between being two people.

The parallels between Travis and Dexter are now firmly cemented. Both are methodical serial killers with clueless sisters, dead parents and both take advice from deceased imaginary father figures.

LaGeurta is more interesting as a villain on the show than she ever was as Batista’s wife. Either the season ends with Deb getting demoted or it ends with Mathews going down and LaGeurta getting his job. It depends on whom LaGeurta sides with. Either way I expect a major change in Deb’s relationship with Dexter. All this recent talk of the ice cream truck killer is leading somewhere.

While I never get tired of watching Batista punch Quinn in the face, their sub plot seemed to be imported from another show. Fun but completely unconnected with everything else going on.

There’s more to nerdy Lewis than we previously thought. And I wonder if by seducing Jaime he’s trying to get closer to Dex or Harrison. Batista’s instincts regarding Lewis were, in hindsight, bang on.

A twist like we got this week is only as successful as its execution. We’ll find out next week if it’s closer to Jekkyl and Hyde or Me, Myself and Irene.

What do you think?