While watching a documentary on real-life killer Ed Gein, I came upon a picture that reminded me of a Michael Myers mask. Ed Gein had made this mask using an actual human face and skin. Gein was a killer that was active in the 1950s. He had a penchant for decapitating his victims, collecting human skulls and fabricating items out of human flesh.

Here is the photo of one the masks that Ed Gein made. To me, it resembles the Michael Myers mask as worn by Dick Warlock in Halloween II (1981). One thing is for sure, it’s a creepy and disturbing sight: 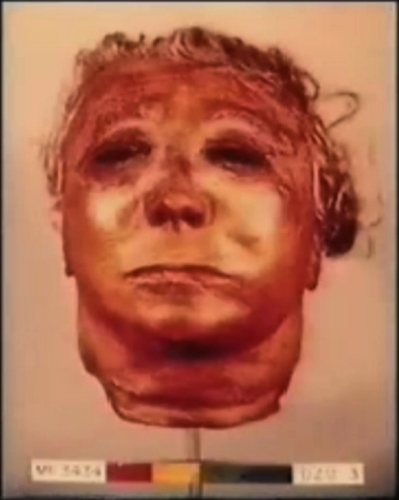 This photo of Ed Gein’s mask was taken from a TV program called Millennium: Fact or Fiction, which first aired in the U.S. in late 1996. It was rebroadcast several years later on the British channel ITV3 as part of their Into The Unknown series.