Michael Myers is not a mindless brute when it comes to killing. He has working knowledge of cars, farm equipment, laundry machines and, in this case, electricity. After 10 years of unconsciousness, Myers returned sharper than ever in Halloween 4. He wanted to take Haddonfield by surprise and have the town to himself. This meant he had to isolate it from the outside world (as if it weren’t already).

Michael inadvertently (?) destroyed the city’s main telephone lines in a blaze of glory. The next step in his plan was to knock out Haddonfield’s entire power supply. To this effect, Myers hid behind a truck at the power plant until the tough-talking Bucky noticed him. 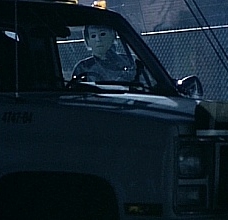 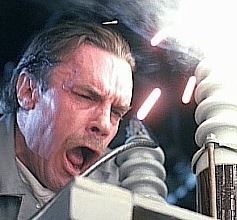 Bucky threatened Myers in a variety of ways. He first stated that Myers was trespassing on city property. Then he used profanity when he approached Myers and told him to not “try that Halloween sh*t with me!” Finally, Bucky insulted Myers by turning his back on him and saying he was going to call the cops.

To get back at Bucky, Myers grabbed him by his tool belt and collar and launched the poor bastard onto the power grid. Thanks to Bucky’s threats and provocations, Haddonfield endured a complete blackout. Myers used the darkness to carry out yet another bloodbath.

Several years later, in Halloween 6, Myers put his knowledge of electricity to use once more. He creatively rewired the Strode/Myers house so that only the washer worked. Then, Michael waited in the shadows for the abusive John Strode to make his noisy, drunken entrance.

As expected, John Strode came home liquored up and ready to terrorize his wife and kids again. But this time, Strode would find himself terrorized for a change. Strode was lured into the basement and Myers emerged from his hiding place. 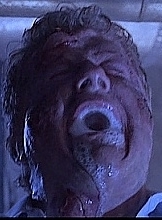 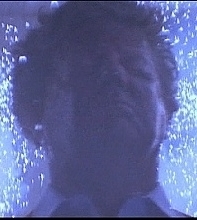 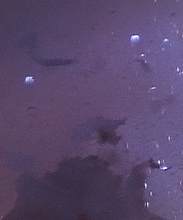 Michael impaled Strode on a rod then slammed him against a fuse box. In the H6 Theatrical Version, Strode began bleeding from the head as soon as the electricity started circulating through his veins. Foam dripped from his mouth, blisters appeared on his face, and his hands turned into crispy claws. As the festival of lights reached its climax, Strode’s head burst like a balloon (apparently, his head didn’t have a skull in it). There was human flesh everywhere, except on Myers. The Shape escaped with a clean mask and impeccable coveralls. 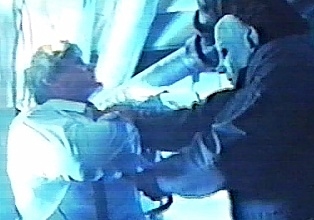 In the H6 Producer’s Cut, Strode’s fate began in a similar manner as above. However, Strode didn’t bleed much and his head didn’t explode. He died because he deserved to die when the electricity made contact with the booze in his bloodstream (and because of the wound from the rod).

Ironically, electrocution was the cause of Michael’s supposed demise in Halloween: Resurrection. Freddie Harris electro-shocked Myers in the nuts and The Shape found himself tangled in live wires while standing in a pool of blood. I guess you could say that Myers got a taste of his own medicine – but he didn’t die, did he? Myers survived, grew a beard and went on to kill Malcolm McDowell twice.

other entries:
Two-Hand Head Crush
Knife in Back Lift