The Evil Dead, for me, is almost a perfect horror movie. Although extremely low-budget, Sam Raimi managed to capture raw and visceral horror that few people at that time had seen before. It just goes to show that a little ingenuity can definitely go a long way.

Not to mention the simple yet wildly successful make-up effects: 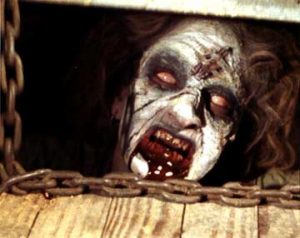 For those of you who don’t know, a remake of The Evil Dead is slated to begin shooting early next year. Produced by Sam Raimi and Rob Tepert, rewritten by Diablo Cody and directed by the relatively unknown short-film director Fede Alvarez, this remake should be interesting to say the least.

Bruce Campbell is said to have a cameo in the film. However, he recently tweeted that there is currently no plans to keep the Ash character in the script. Similar to The Thing re-make coming out in October, this may add a fresh spin on the film.

Prepare yourself for a bloodbath.