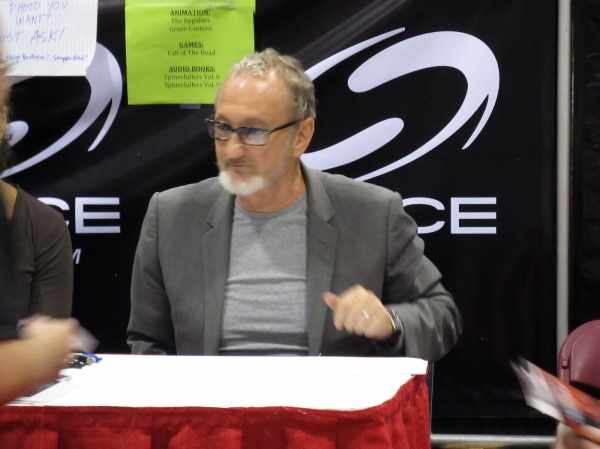 During the final days of August, I attended Fan Expo Canada in the city of Toronto. This large convention caters to Horror, Sci-Fi, Comics and Gaming – this year it was a 4 day event. The Guest of Honor was Robert Englund and what caught me by surprise was how popular Mr. Englund is. Most people, it seemed, wanted to get an autograph from or a picture with Freddy Krueger himself.

Mr. Englund had a line-up of a hundred people on the first day. You might say, “ehh, 100 people ain’t much,”  but these 100 people were ones with tickets to stand in line and wait. Other people had tickets to get Englund’s autograph but were told to come back later and not stand in line.

The only other person who generated equal attention and buzz was actress Eliza Dushku. However, she was there for only 2 days. Englund was there for all 4 days, and all 4 days he had an increasing line-up of fans and tickets being sold for his autographs. 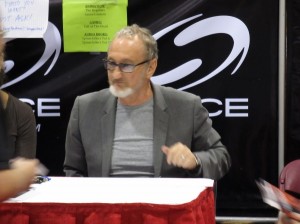 How many memorable roles has Mr. Englund had? There is Freddy and the role he played in the original V television show. There are others, but none on the level of Freddy. I am in awe of Englund’s continued popularity. Obviously, people still love Englund for Freddy and the Nightmare on Elm Street movies.

I’m not a fan of the Nightmare franchise, though I’ve watched every movie. I don’t hate Freddy, but i don’t own one Nightmare DVD or any Freddy item. Things worked out for me that way. Even as a kid, I was a Michael Myers fan precisely because Freddy was more popular. Michael Myers was a kind of underdog in my days, but now in 2011, Mr. Englund a.k.a. Freddy Krueger still has massive star power as displayed at Fan Expo.

I got McDowell’s, Henriksen’s, Bradley’s, Hayden’s autographs. I was excited to see them this year and went with that intent. Getting Freddy’s autograph was not on my agenda. But, he made his presence felt. By the third day of Fan Expo, Malcolm McDowell’s autograph line was non-existent. He’s an actor with hundreds of credits to his name. Among them, the films A Clockwork Orange, Caligula, Halloween (2007), Time After Time, Star Trek Generations, and television shows Heroes and Entourage. Along with Lance Henriksen and Martin Landau, McDowell is a film legend. Is Robert Englund a film legend, in the league of the aforementioned gentlemen, too? Though the 2010 remake of A Nightmare on Elm Street didn’t feature Englund, one thing is for sure – The original Freddy Krueger is not dead.