Little is known about Dr. Mixter, except for the fact that he was a raging alcoholic. The night of October 31st, 1978, Mixter was the attending physician at Haddonfield Memorial Hospital. In Halloween II, Mixter tended to Laurie after Evil (a.k.a. Michael Myers) attacked her. It was no surprise to the hospital staff that Mixter arrived drunk again. 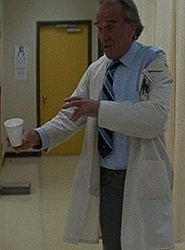 On that particular evening, Mixter’s excuse for drinking was the same one as for Laurie’s parents: It was Halloween and that meant party time! (who cares about your patients or if your children are safe). Dr. Mixter was charged with malpractice several times. However, he always escaped the charges because he was too unfit (i.e. drunk) to stand trial. 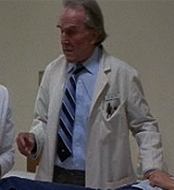 Laurie had relatively minor injuries – she cracked a bone. Even so, Mixter “put her out” and then wasn’t sure if he stitched her up correctly. The medication that Mixter gave to Laurie caused her to have a severe reaction. No wonder the hospital was always empty.  Getting treated by Dr. Mixter was as risky as going to see Dr. Giggles.

It was not unusual for Mixter to keep the lights off in his office even when he was in it. He liked the darkness because it made his aquarium look cool. Keeping the lights off was a habit that started in Mixter’s youth.
As a child, he was teased by other kids. They’d call him “DJ Mixer” – the hip hop deejay. As he grew up, Mixter came to accept the nickname. In addition to keeping the lights off in his office, he installed a set of turntables, mixer and oversized headphones. He also wore pajamas while chillin’ and layin’ low in the cut.

Mixter had an illegitimate son (who would go on to star in his own movie, Halloween: Resurrection). Dr. Mixter stopped being a careless alcoholic when a needle was expertly poked into his eyeball (no one knows who did it, but Nurse Janet is the prime suspect). 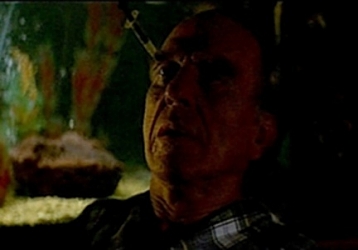