Mark Crow (or known here as Artmark) has been an important part of the Michael-Myers.net community for several years. This interview was previously posted by our friends over at Reelybored.com, and we are reposting it here for those of you who haven’t seen it. 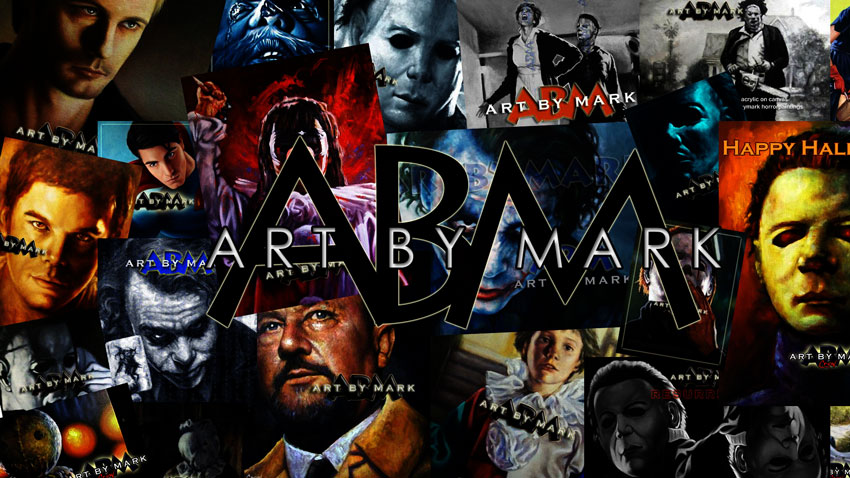 I’ve known of Mark for quite some time when he would post some of his artwork for sale on various horror forums on the “webisphere”. In particular, because I frequented them often (usually as a “lurker“), threads that involved the famed fictional serial killer Michael Myers of the Halloween films. Immediately, my eyes were enthralled by this artistic talent and my pockets were itching to make a purchase. Only problem there was no money to burn. Time passed and recently I, again, have re-”discovered” his paintings on a forum (for those curious Michael-Myers.net) and was amazed to see how he has improved on his craft and perfected his horror art. But, make no mistake, his artwork is not limited to Mr. Myers as it is only a small part of the larger spectrum. It is no wonder why a big-time horror magazine took notice and invited him to produce their covert art – twice!

Mark Crow is an illustrator, painter and art teacher from Oklahoma who has been painting for 20 years and teaching both children and adults how to draw and paint. In 2005, he started painting screen caps from his favorite movie, Halloween and selling the works on eBay and horror related message boards and now on Facebook “artbymark horror paintings“. He has painted and shipped nearly 200 works of art in the past few years. 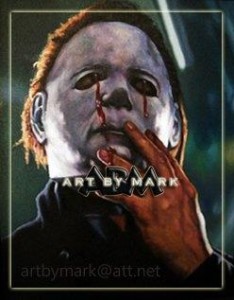 Reelybored: Tell us about your first attempts at being creative.

Mark Crow: I took art lessons as a child and developed a love for portraiture drawing from movie magazines, etc. I did that for several years and turned it into a lucrative hobby – drawing people portraits in graphite all thru high school until I went to a fine arts college. There, I was told that illustrators are a dime a dozen and I got very discouraged. So, I later went to a trade school and became a graphic designer. Family events kept me from moving far from home so I used my skills to become an art teacher.

Reely: What motivated you to become an artist?

Crow: I guess I was always good at drawing things around the house or cartoons from the newspaper. It certainly kept me occupied. I wasn’t interested in music or the great outdoors and always knew I wanted to be an artist and sell my work.

Crow: I love horror movies. Halloween was the best day of the year for me as a kid so I think it was natural for me to want to use the trappings of the holiday in my later work which really just became about the Halloween movies (especially in the beginning of my career as a freelance painter). When I was in college I was new to the area (out of state) so, quickly, I escaped head first into John Carpenter‘s, “Halloween” – it became by best friend and I made it my mission to collect everything I could to fill the void of being so far from home at the time. I ended up making a lifesize model of Michael Myers out of discarded paper and old clothes. I felt safer with that thing standing in the corner or seated in the living room incase I ever got robbed [laughs]. Soon, I realized that collecting was out of my reach financially and I began to just “paint Halloween.” I had no idea how that would go over and at first I thought it was a weird thing to try. Im glad I took the leap because it sold very well on eBay and the message boards back then, and still does on my Facebook page.

Reely: As an artist, what would you say is the best work you have done and proud of?

Crow: I would have to say my Sam Loomis, Youth Myers and a Joker painting I did a few years back.

The Loomis and Youth Myers are available for sale via Mark’s FB page.

Reely: Who are your inspirations?

Crow: Funny, when I started painting I had no idea who Basil Gogos was, but my work was compared to his (only because it was horror related) and I’m no Basil by any stretch of the imagination. But I learned a lot from his work and works by artist Leonard Wren. Im also a big fan of old movie posters by Richard Amsel and artist Richard Schmid.

Reely: What are your goals for the future?

Crow: I want to build up my teaching. I love working with kids and adults and always had a knack for explaining things in an easy-to-understand way and art is what I love to do. I’d like to be published again. Fangoria featured my art on 2 recent covers #308 & #309 (Nov 2011 and Jan 2012). 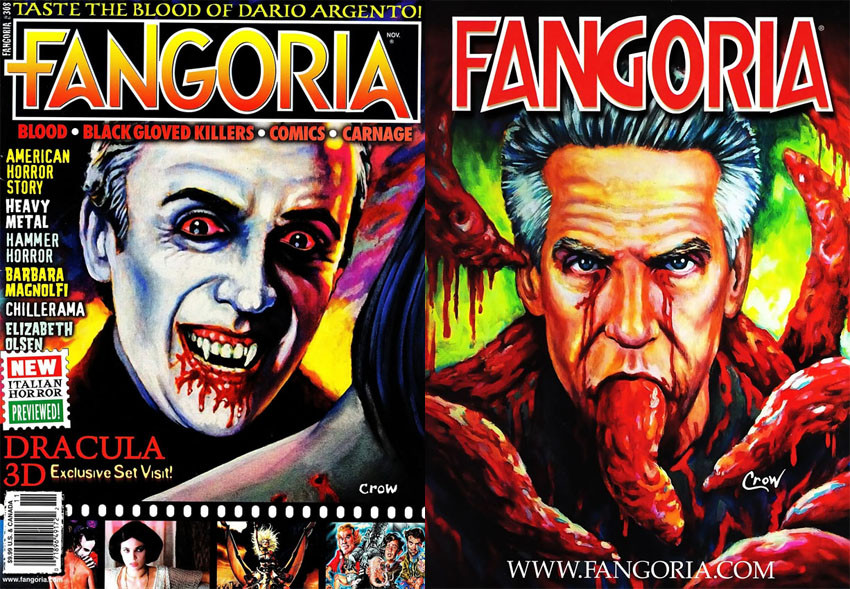 Reely: Any funny stories, rookie mistakes that you look back at and laugh about?

Crow: Hell yes! I look back on my first attempts at painting Michael Myers and cringe . I wonder what I was thinking and look at those early works as ghosts from the past. But, sometimes I look at them and wish I could remember how I did some of the paintings and wish I had never sold a few. In the beginning, I had no idea what I was doing other than just putting raw talent to the test… there were a few good ones I let go of that I wish I had back too.

Crow: Practice every day without fail. Be humble about your work and open to suggestion. Every artist needs a good foundation in drawing anatomy, perspective and above all else, color theory. The right colors are very important.

To see more of Mark’s work or to purchase any of his artwork, be sure to visit him on his Facebook page – ArtbyMark HorrorPaintings