The Michael Myers Head Knockers figure was one of the first HalloweeN collectibles to find its way into my home. Before I got around to replica Michael Myers masks, HalloweeN autographs, posters and cards, I obtained this bobble head of my favorite slasher. Up until this item, my HalloweeN collection consisted of DVDs and a mass-produced Don Post The Mask. 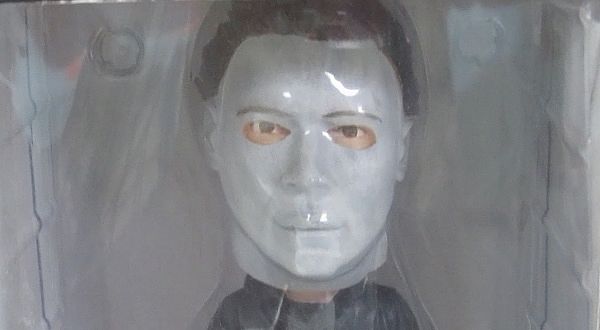 Released in 2004, the Michael Myers Head Knockers figure is a pretty nice novelty item. In comparing the actual item to the stock photo, you will find that the stock image is spot on (something that doesn’t occur often, especially with official Michael Myers and HalloweeN memorabilia).

This product was issued by NECA with licenses from Dimension Films in order to use the names “Michael Myers” and “HalloweeN.” Recall that Dimension has produced every HalloweeN sequel from Halloween: The Curse of Michael Myers onward. Promotional artwork from HalloweeN 6 is featured on the top side of the box. 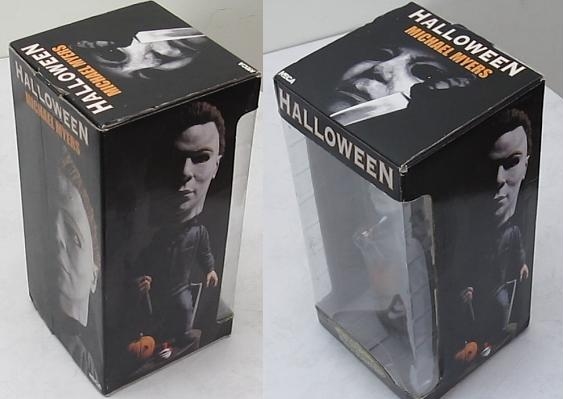 The box has a height of 9 inches while the figure itself is slightly less than 8 inches tall. The figure’s details are quite good. The Michael Myers mask covering the oversized head has a great sculpt and is carefully painted. The mask has brown eyebrows, but they are thin enough to not cause distraction. Also, Michael Myers’ eyes are realistic and intense. The figure’s head conveys that Michael is wearing a mask and that the mask is not his real face. 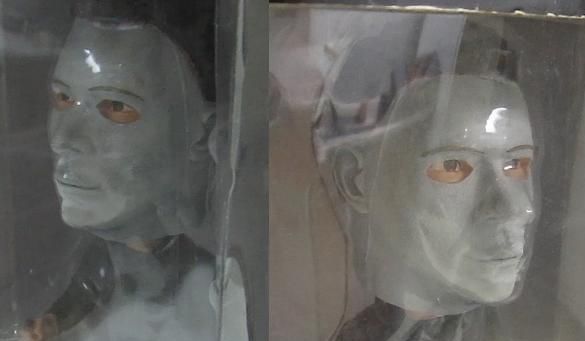 This figure wears dark coveralls with a popped collar. Myers holds a knife in his right hand. At The Shape’s feet lie a carved pumpkin, Judith Myers headstone and the clown mask that he wore when he offed his sister in 1963. The base of the figure reads “Michael Myers.”

These items are not difficult to obtain these days. They don’t cost much either. I haven’t removed my figure from the box (although the windowed part is becoming detached). While I still treasure this item, I no longer have it on prominent display like I used to. Sadly, the Michael Myers Head Knockers figure has become one more box I have run out of space for. 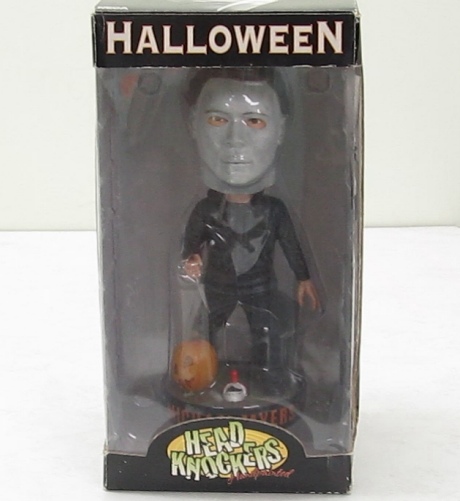