HalloweeN’s Michael Myers usually prefers to use really long kitchen knives to dispatch his victims. However, the Myers Techniques article series will profile other ways in which Myers has brought death to people. This first entry will look at instances when Myers has attacked someone using his Two-Hand Head Crush method.

Michael Myers first used this tactic in Halloween 4. The two-timing Brady was in the Meeker residence along with Rachel and Jamie. Michael Myers was lurking in the house as well. It was up to Brady, who had trouble keeping his pants on, to confront the masked maniac. 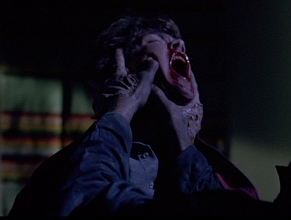 Brady stood his ground and took a swing at Myers with a gun. He then connected with a punch to The Shape’s crisp mask. Myers quickly became tired of Brady’s antics. He grabbed Brady by the head and hoisted him up off the floor. Using his bare hands, Myers squashed Brady’s bushy eyebrows along with the rest of his face.

Myers didn’t use the Two-Hand Head Crush technique again until Halloween: Resurrection. Dangertainment contestant Jim was on the receiving end that time. Although Myers had his knife with him, he didn’t deem Jimbo worthy of being gutted with it (Myers stabbed the wall instead). 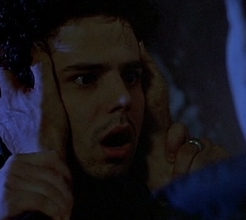 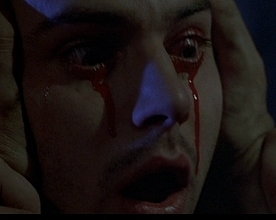 Once Michael grabbed Jim by his greasy head, there was nothing left for Jim to do except grab on to Michael’s wrists. As Michael squeezed Jim’s skull, blood trickled out of Jim’s eye sockets and onto his rat-whiskers style mustache.

Years later, Michael Myers was re-imagined with 2007’s Halloween, but the Two-Hand Head Crush returned. Myers had Laurie in his clutches, but Dr. Loomis convinced him to let her go. Loomis stated that he had “failed” Myers. He was right. After 15 years of therapy, Myers still couldn’t make a decent paper-mache mask. 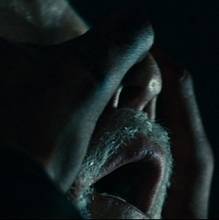 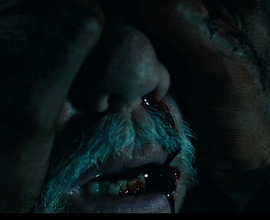 Myers threw Laurie to the side and lunged at Loomis. He compressed Loomis’ cranium and blood dripped out onto Loomis’ dentures and fake mustache. Unlike Brady and Jim, however, Loomis survived the Two-Hand Head Crush. He showed up in Halloween II (2009) with no visible signs of long-term trauma (in other words, his skull looked to be the same size as before).

The Two-Hand Head Crush method is a time-consuming way for Myers to off someone (compared to slitting a person’s throat, for example). It also requires the use of both his hands. This puts Myers at risk of being attacked by someone else. Still, this Technique is very gruesome, it has a success rate of 66.67% and it is a display of Michael Myers’ sheer strength and determination to kill.