Some characters in the HalloweeN movies have reacted to situations in rather curious ways. Whether it’s the fault of the actor, the script, or the director, a number of reactions have been unbelievable or silly. This article will be the first in a series. Let’s start with the 1978 classic HalloweeN. The film began with a character reacting in an odd manner.

I’m speaking about the woman who is present when young Michael is standing outside after stabbing Judith. I say “woman” because, in the movie, it’s not entirely demonstrated that she is Michael’s mom. The man is credited as “Peter Myers.” They are both loosely implied to be Michael’s parents through some of Judith’s dialog (she tells her guy friend that her parents will be back soon).

For simplicity’s sake, these characters will be referred to as Michael’s mom and dad. Michael exits the house and is unmasked by his dad. Young Myers is holding up a massive knife that has fresh blood on it. 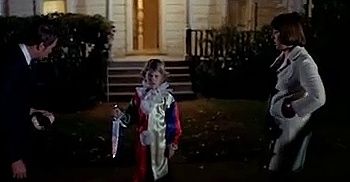 The dad, stunned and frozen in place, stares at Michael. Meanwhile, the mom has a bland expression on her face. She looks bored, as if she’s about to yawn. She doesn’t seem concerned that her son is holding a sharp weapon with blood dripping from it. The mom remains calm, stands back and casually puts her hands in her coat pockets … What kind of reaction is that?

The next Odd Reaction comes courtesy of the man himself, Michael Myers. In Halloween: The Curse of Michael Myers, Kara Strode strikes Myers over the head with a fire iron. Michael goes tumbling down the stairs and seems to be out cold. 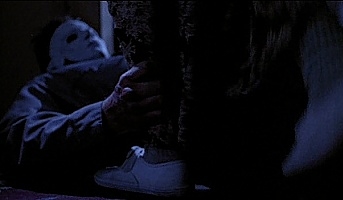 Kara proceeds to step over Myers to get to her son Danny. Suddenly, Michael grabs her ankle. Kara smacks Myers across the arm with the fire iron and he clenches his fist and moves his arm away as if he’s badly hurt. WTF? 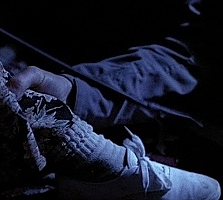 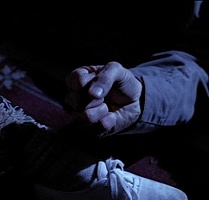 Michael Myers has been run over by cars, shot dozens of times, set on fire, etc. but he’s hardly given any indication that he felt very much. Yet, when Myers takes an iron rod to the arm, he recoils and acts as if it were the most painful injury he’s ever endured.

Of the two Odd Reactions here, the mom’s bothers me more. She’s so detached from what’s going on that it looks like she’s reading her lines off of a cue card (which is weird since she doesn’t have any lines in the movie). The Michael Myers one bugs me, too, but at least it’s funny. The mom’s reaction is annoying (and why the hell is she wearing Dr. Loomis’ trench coat?). 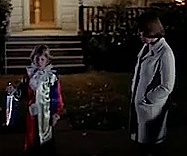