With the announcement that all of HalloweeN‘s early sequels will be hitting blu-ray later this year, let’s go back to 2008 to revisit another release. Billed as a “6 Disc Collector’s Box,” this HalloweeN 30th Anniversary Commemorative Set was put out by Starz Media/Anchor Bay Entertainment. This item was limited to 20 000 copies and each box had a unique number. However, this set doesn’t appear to have gone out of print yet. Some retailers in the U.S. still sell it brand new for as low as $46.99. 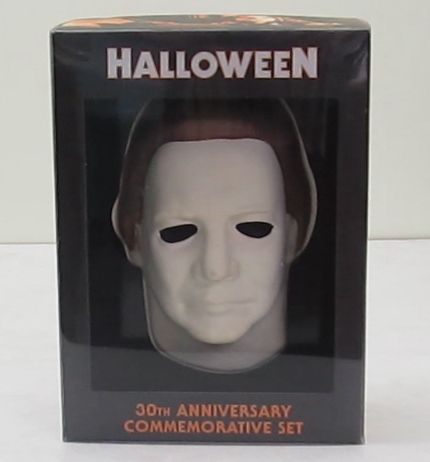 Anchor Bay has (or had) the home video rights to HalloweeN (1978), Halloween 4 and Halloween 5. Over many years, the company has released various editions of each film on DVD and blu-ray. This particular box set aimed to be “the ultimate six-disc collector’s set” (it says so on the back). But this release didn’t offer anything new to collectors. It contains previously released material. So, what is “ultimate” about this set? “Ultimate” how?

I picked up this HalloweeN box for about $50 a few years ago. It was in the used section of a video store. As luck would have it, the only thing used about my copy was that the original owner had removed the factory plastic wrap. The DVD portion inside was still sealed and it included the plastic sleeve that protects the box.

But, why did I buy this thing? The discs in the box were nothing new and I already owned each of the movies separately. This box set contains: HalloweeN DVD, HalloweeN blu-ray, Halloween: Extended Cut DVD, Halloween 25 Years of Terror DVD, Halloween 4 DVD and Halloween 5 DVD. All 6 discs are housed in one standard DVD case. The 25 Years of Terror compilation had been released on its own as a 2 disc set. Yet this “ultimate” box has only one of the discs. Needless to say, this set features an odd selection of material to celebrate HalloweeN’s 30 years. 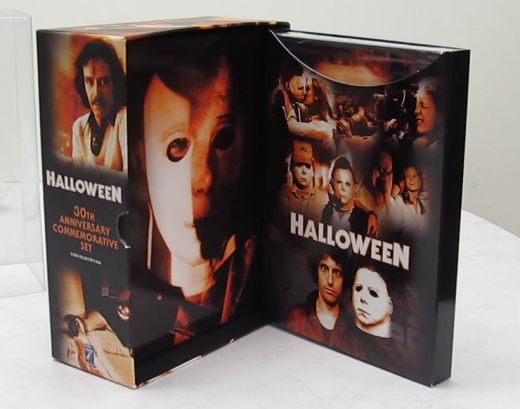 If you’re a newcomer to the HalloweeN series, this is a worthy pick-up for $47. The blu-ray is nice, the previously out of print Extended Cut is also great. Plus, Anchor Bay included the Divimax versions of both Halloween 4: The Return of Michael Myers and Halloween 5: The Revenge of Michael Myers. Then there’s the mask at the front of the box…

The thing inside the windowed part of the box is a mini Michael Myers mask. It’s rubbery and comprises the front of the mask. I remember back when these boxes first came out. The mini mask was hyped up to be a wearable replica. Back then, Anchor Bay failed to mention that the mask was wearable if you were a newborn baby and you were missing the back part of your head.

The mask looks like a cross between a squinting Robin Williams and a young Julio Iglesias. The hair resembles Easter Bunny chocolate. At least it doesn’t have eyebrows or sideburns. The mask is slightly amusing. Perhaps a new booklet with high quality behind the scenes photos could’ve been that extra something to properly commemorate the 30 years of HalloweeN. 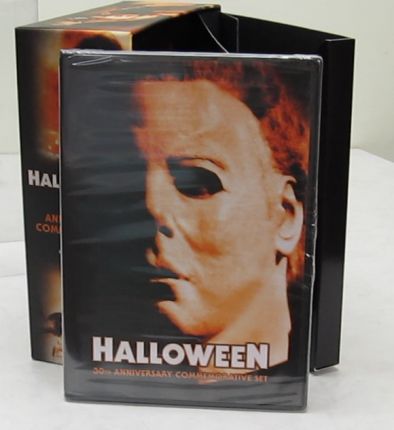 I purchased this box for display purposes I suppose. I’ve never opened the discs. When I first got it, I displayed it with other HalloweeN memorabilia, but it never looked right. I then shoved it alongside my other box sets. I now have the box sitting atop some other DVDs. “Display purposes” seemed like a great idea at the time. However, there are worse things I could’ve spent those 50 bucks on. 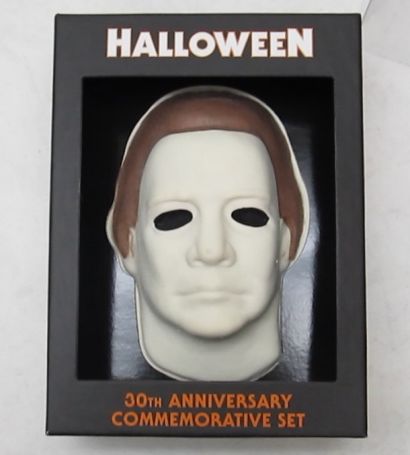