The force of pure evil has given Michael Myers the strength to survive just about anything. But, what about Michael’s nemesis, Dr. Sam Loomis? How has Loomis managed to absorb the punishment that he has received over the course of the HalloweeN series?

While Dr. Loomis wasn’t injured in Halloween, things changed for the character during the final act of Halloween II (1981). Loomis attained a hard-to-kill quality. Myers stabbed him in the gut with a scalpel. After falling back, Loomis made a quick recovery and didn’t seem to be bothered by his wound. Loomis was no longer shown when part of Haddonfield Memorial Hospital exploded. However, the blast was severe enough to make Michael succumb to the fire. 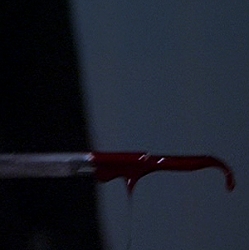 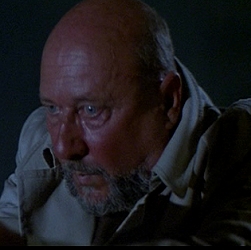 With Halloween II, Michael Myers became a killing machine – murdering inconsequential characters in a variety of manners. Meanwhile, Dr. Loomis became more obsessed in dealing with Myers. This is further witnessed in Halloween 4. At the gas station, Loomis recognized that Michael couldn’t be reasoned with. Loomis opened fire on him, hoping to stop him from returning to Haddonfield.

The hospital explosion left Loomis with an injury to his leg and scars on his face and hand. This is evidence that Loomis had indeed endured the explosion but had been far less affected by it than Michael had. After all, Myers was the one who had been in a years-long coma with his entire head bandaged up, not Loomis.

While Halloween 4’s subtitle was The Return of Michael Myers, Dr. Loomis’ return was equally noteworthy. Loomis’ strong determination to destroy Myers may have played a part in his recovery. It’s interesting to note that no one ever addressed how Loomis survived the scalpel wound or the fire. 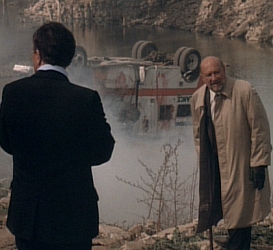 Dr. Hoffman’s explanations to Loomis concerning the low probability that Michael survived the ambulance crash in Halloween 4 were pointless and comedic. Hoffman was talking to a man who had himself survived a devastating inferno with relatively minor injuries.

Michael’s malevolent soul had made him bigger and able to withstand any opposition. However, his adversary had also become stronger. Loomis’ unrelenting drive to stop Michael had made him close to indestructible. Myers is evil and feeds off of the fear that people have of him. Loomis, on the other hand, is fearless – he is the counterbalance to the people’s fear. Perhaps being fearless against evil is also part of what gives Loomis his strength. 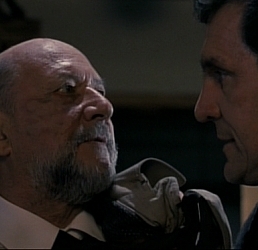 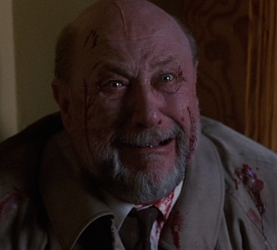 At the conclusion of Halloween 4, Loomis was a bloody mess. He had narrowly escaped a gasoline station explosion; he was humiliated by a group of morons who literally left him in the dust; he had been shoved by Sheriff Meeker; and he was cut up badly when Myers threw him through some glass. To top things off, Loomis manifested psychological distress upon seeing Jamie with bloody scissors in her hand. Next time we’ll examine how Dr. Loomis survived more injuries and what many consider to be the worst kind of suffering – mental suffering.