The Fate of Michael Myers Look-alikes in the HalloweeN films

In the world of HalloweeN, almost anyone wearing a Michael Myers mask is putting their lives and well-being at risk. With the exception of Dr. Loomis, Dr. Wynn, Jamie Lloyd and, perhaps, Laurie Strode, not many have seen Michael Myers’ unmasked, adult face. Yet the sight of someone wearing Michael’s costume is enough evidence for anyone to believe it’s the real Michael Myers.

In Halloween II (1981), Dr. Loomis caught a glimpse of someone wearing something similar to what Myers wore when Loomis shot him out the window. It turned out that this Michael Myers look-alike was local teenager Ben Tramer. He happened to be drunk, which made him walk slowly. He was also wearing coveralls with a popped collar and a pale mask. 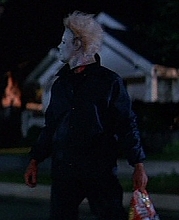 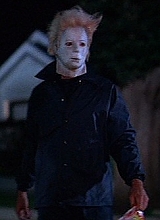 Loomis drew his gun and gave chase. The commotion that Loomis created distracted Ben Tramer as he crossed the street. Unfortunately, Tramer wandered into the path of an oncoming squad car. He was hit by the vehicle and went up in flames. His charred corpse was later examined and it was determined that he wasn’t Michael Myers.

With most of the Haddonfield Police Department massacred by Myers in Halloween 4, it was up to four local beer-bellies to take up arms and try to end the psychopath’s reign of terror. As the four men cruised the desolate streets of Haddonfield, one of them stated, “There he is!… I seen his face… right there in those bushes.” The 4 men got out of the truck and opened fire on the bushes. 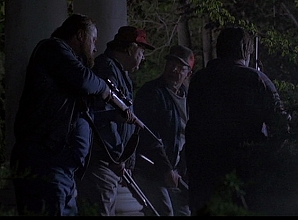 After shooting up the bushes, the men walked closer to see who exactly they shot. Upon seeing the body, one of the men remarked to Earl that, “It’s Ted Hollister.” Earl then turned to the guy who claimed he had seen Michael Myers’ face and said, “You dumb son of a b*tch. You said you saw Myers.”

A similar event had occurred in Halloween 4 just before the vigilantes went trigger-happy. Curiously, it also involved bushes. Three men wearing Michael Myers masks and coveralls emerged from behind some bushes just as Dr. Loomis and Meeker had found Jamie and Rachel. Loomis drew his weapon, ready to shoot one of them. The man who Loomis intended to shoot took his mask off and revealed himself to be a prankster. 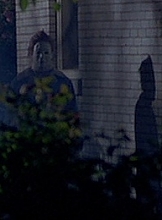 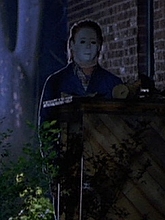 As the three clowns in coveralls and Myers masks ran away laughing, Sheriff Meeker had some choice words for them. Meeker told them that next time they pulled a stunt like that they’d spend a weekend in jail. (By the way, what kind of threat is that? The pranksters were almost shot to death. Spending one weekend in jail is peanuts compared to getting filled with lead).

One year later, in Halloween 5, a dude called Spitz escaped being shot by two cops. Spitz chose to go dressed as Michael Myers to a Halloween party. What’s worse is that he had chased Tina outside with fake knife in hand. 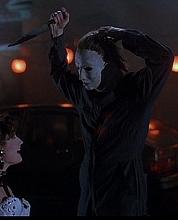 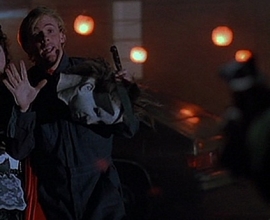 Afterward, Spitz and his girlfriend headed into a nearby barn to engage in some safe sex. Spitz once again wore his Michael Myers mask and scared his girlfriend half to death. Unfortunately, the real Myers was in the barn as well. Myers stabbed Spitz through the back with a pitchfork. 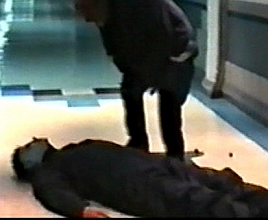 During the final act of the Producer’s Cut of Halloween 6, Michael Myers was seemingly stopped by Tommy’s runes and blood sacrifice. Dr. Wynn found Michael paralyzed, but Michael was not happy – he clenched his fist.

When Dr. Loomis came in, he saw Michael Myers on the floor. Loomis unmasked Myers and it was Dr. Wynn instead. It’s uncertain what happened to Wynn after he passed the Thorn curse to Loomis. However, Myers must’ve knocked Wynn out cold in order to switch costumes.

In Halloween: H20, Laurie Strode hallucinated twice that her boyfriend Will was her brother Michael Myers. The first time occurred when she saw Will’s reflection in a store window – for an instant, she thought it was Myers instead of Will.

The second time took place outside the school at night. Will was walking toward Laurie, however she thought it was Michael approaching her. Luckily, Laurie didn’t have a gun on her (or an axe) in either instance, or we’d have had another unintended casualty (with her being mentally unstable and all). 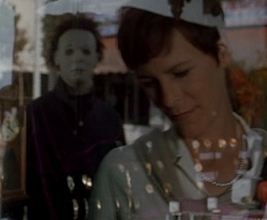 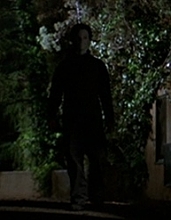 Later on in Halloween: H20, Will got caught up in the hysteria and thought he saw Michael Myers emerge from the shadows down the hall. He took a gun and shot at him several times. It wasn’t Myers; it was security guard Ronny (LL Cool J). Ronny suffered a head wound as a result of this incident. 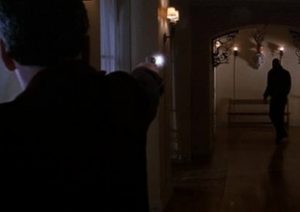 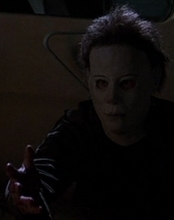 As if that weren’t enough Michael Myers confusion for one movie, Laurie car-jacked an ambulance that presumably had Michael Myers’ body inside. After crashing the vehicle, Laurie saw a man pinned between the ambulance and a tree; he was wearing coveralls and a Michael Myers mask. Laurie swung an axe at him, and sliced his head off clean.

Halloween: Resurrection revealed that the man was a paramedic, not Myers. In the Myers house during Halloween: Resurrection, Busta Rhymes, dressed up as Michael Myers, was assaulted by Jim with a prosthetic, made in Taiwan arm. Sara, Rudy and Jim all thought that Busta was the real deal. Busta got up from the floor and claimed that he had been hit “like I murdered ya f*ckin’ mother or somethin’!” (At least Busta lived to see another day). 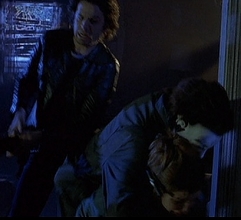 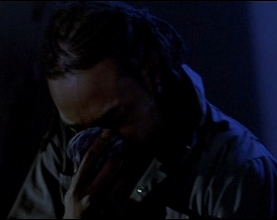 It’s evident that wearing anything that makes you look like Michael Myers is never a good thing in the HalloweeN universe; it’s asking for a great deal of trouble. You may suffer a beat down, get shot at, be threatened by Sheriff Meeker, have Dr. Loomis wave his gun at you, be forced to pass a curse on to somebody or be killed in catastrophic ways.

In Halloween 6, we were told that Halloween celebrations had been banned in Haddonfield after the events of Halloween 5. What the Haddonfield authorities should have done way before that was simply ban the sale and use of Michael Myers masks and costumes. Ben Tramer’s death could’ve served a greater purpose.