Here’s the first in a series that will feature an autographed item from any of the people involved in the Halloween franchise. Actor William Forsythe will kick things off. Forsythe played Ronnie White in Rob Zombie’s Halloween in 2007. Ronnie was Deborah Myers’ violent and foul-mouthed boyfriend. Forsythe’s character had a small but memorable role (and death) in the film. 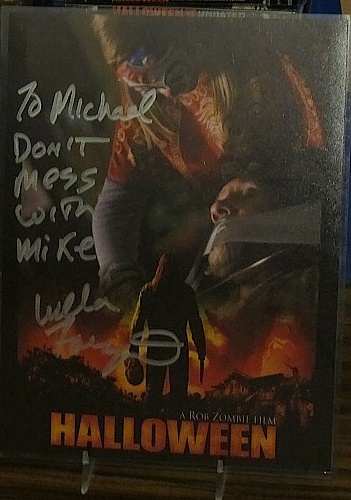 I obtained Forsythe’s autograph in person at Fan Expo 2010. He had just finished working on Dear Mr. Gacy, a film which made better use of Forsythe’s acting talent – he skillfully played the notorious serial killer John Wayne Gacy. A review of Dear Mr. Gacy is also be available here.

In person, William Forsythe has a tough, man’s man exterior. However, he’s an extremely nice person who is appreciative of his fans. I gave him my name so he could personalize the autograph. The message “Don’t mess with Mike” was his idea. I don’t know whether he always includes that when signing Halloween memorabilia or not, but I thought it was very cool of him to do so. Other Halloween related autographs will be posted here in the coming weeks.