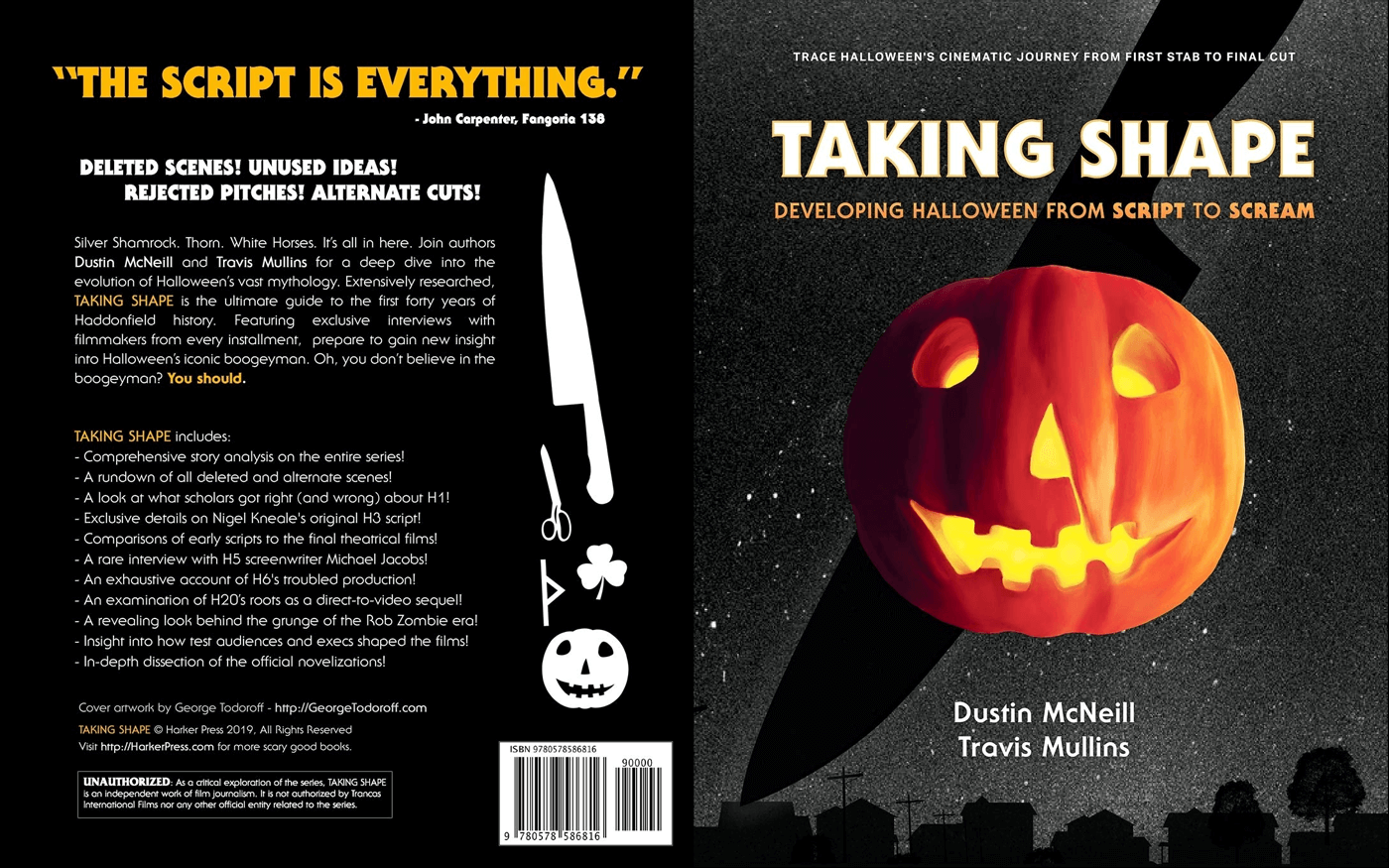 Authors Dustin McNeill and Travis Mullins have slung us a treat to soothe our post-Halloween blues this year. Their new book Taking Shape: Developing Halloween From Script to Scream tackles the entire franchise thus far, detailing the production of each film installment from John Carpenter’s original 1978 classic to last year’s hotly-anticipated direct sequel. I just received my copy of this great coffee table book and I’m already done reading it.

We’re presented with an impressive-looking glossy soft-cover with striking graphics and text. You would easily be able to identify this as a Halloween-related publication on the bookshelf from across the room just by its spine alone. Stylistically, the main theme is carefully adhered-to. The use of the classic and familiar Serif Gothic for headlines, page numbers, and titles is an especially nice touch. In regards to structure, each film is allotted its own section, complete with interviews; photos and other visual goodies; and detailed essay-style breakdowns of general production – all laid out in a manner that’s consistent across all film sections. Thanks to this clean formatting, the book is very easy to navigate.

The passages are all very well-written and engaging, and despite the vast amount of information within, this book is a fairly quick read. The writing is grammatically-sound and easy to understand on the whole; I caught only two small spelling errors as I read, which were very unobtrusive. Production of each film is detailed from writing and casting, to editing and promotion. The information is delivered in a fairly unbiased manner, even allowing for the occasional disagreement between sources. This is refreshing, as most of these types of books tend to subscribe to the “yep, this is how it happened because so-and-so said” delivery style. Redundancy is rarely an issue within the massive amount of text. Occasionally, anecdotes or facts are stated without elaboration to later be fleshed out in the interview section, for example.

The authors opt for a writing style that straddles the line between catering to die-hard scholars of the franchise and giving enough information and backstory to guide casual fans along. They managed to hit the sweet spot that allows for fans with any level of knowledge to enjoy themselves within the pages. Each film segment closes with a select handful of critic reviews. This gives an amusing and interesting perspective into how the movies were received within the context of their time of release.

Scattered throughout are a ton of great photos, production stills, and screen grabs – all relevant to the content of the text. Some of the photos suffer from slight pixellation and/or over-compression, but this can be overlooked when enjoying the wealth of visuals included. These visual aids do very much to help propel you through the book and break up the sections of text, as well as simply functioning as eye candy.

The fact that Mullins and McNeill were able to conduct interviews with key crew members of each film sets this publication far ahead in terms of exclusive content. These segments alone are worth the price of admission. We are frequently given an honest and unfiltered opinion on various subjects involving the Halloween films from their respective crew or production team members, thanks to these interviews and the quotes sprinkled all throughout the book. Also adding to the exclusivity is the trove of alternate script ideas, story pitches that didn’t make the cut, and details on alternate scenes that never saw the light of day. This offers a fascinating look into “what could’ve been”.

With its pleasing visual style, welcoming tone, engaging facts, and overall wonderful presentation, Taking Shape: Developing Halloween From Script to Scream does very well in demanding a place on your bookshelf. I strongly recommend picking this up, whether you are a Halloween or general horror fan.

Pick up your copy on Amazon today!