When it comes to Halloween: Resurrection masks, I’ve always maintained that nothing beats a nice copy of the Cinema Secrets H8. There are many editions of these masks by this particular company. There are also numerous claims as to which mask is which edition. It’s not my intention to sort through a mess of speculation. What’s offered here is a simple review of the Cinema Secrets mask that I have.

To some, the H8 mask has some simian features to it (the funniest opinion I’ve read is that it looks like a shaved gorilla). At first, I found the H8 mask to be somewhat off-putting until I realized that I disliked the mask mainly because of the movie. Halloween: Resurrection isn’t a masterpiece, but thanks to Bianca Kajlich (who played Sara), I’ve accepted it. 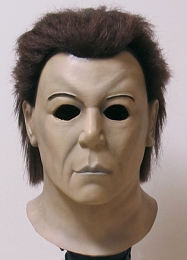 Once I came to terms with the film, I came to appreciate the way Michael Myers was portrayed in it. I found Brad Loree to be a better Myers than Chris Durand in Halloween: H20. Myers in H20 seemed like a random guy (he didn’t seem like Michael Myers). Then, a few years back, I came across an ad in the Classifieds. I ended up buying a Cinema Secrets H8 mask.

This particular copy is made of very thick latex – it’s a heavy mask. It can stand on its own and it holds its shape no matter how you display it. When I obtained it, it wasn’t slit in the back. It doesn’t have nostril or ear holes. It has very precise detail in the mouth and forehead areas. It’s a large mask and the color is rather dark: it’s a mixture of grey, brown, flesh and white hues. The hair is regular synthetic hair. 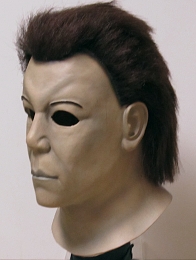 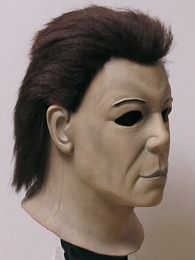 I remain extremely pleased with this item – it’s my definitive H8 mask. This is the only time I’ve been able to say that I prefer a mass-produced Myers mask to those offered by independent makers. Judging from pictures and videos I’ve seen of other Cinema Secrets H8 masks, the finishing tends to vary. However, if you’re seeking an H8 replica, keep your eyes peeled for a cool copy of the Cinema Secrets mask.

———-
I’d like to send some shout outs. Shout out to “zombie 666” aka “zomby69XOXO.” He built a kingdom of dvd-r’s in his mom’s basement – talk about a rags to more rags story. Strange thing is… he still lives in his mom’s basement. Goes to show that even though you were once employed at Blockbuster video, Blockbuster can close down and disappear but still manage to fire you (even though they closed down).

Shout out also to “myers-freak,” the clown of the Myers world. Aside from being a very funny man (he looks like Flavor Flav), he collects garbage. And I don’t mean he’s a garbage-collector, he’s a collector-of-garbage – he keeps the garbage for himself. I wouldn’t call him a hoarder. As he once explained to me, hoarders can’t stop collecting things of all sorts, whereas he can’t stop collecting or smelling like garbage specifically.