Don Shanks Talks About Halloween 5 and 6

Don Shanks, who played Michael Myers and the Man in Black in Halloween 5: The Revenge of Michael Myers, recently disclosed some HalloweeN tidbits. During a discussion panel held at Monster Mania 21 on March 10, 2012, Shanks expanded on the alternate opening scene of Halloween 5. Shanks revealed that there was a deleted sequence where Myers is rescued from the river by a man and is tattooed on the wrist. The man performs “incantations” over Michael’s motionless body.

Shanks also told of how Michael Myers killed the man who rescued him. He stated that on the eve of Halloween, Myers awakens and hoists the man over his head and slams him down on an altar. He then stabs the man with a rock. Shanks stated that this scene was cut out of the film because it was deemed too violent. The Hermit storyline was introduced instead.

This information makes one wonder why this alternate scene hasn’t been formally released. All the Halloween 5 DVD editions up to this point have only included a lousy, behind the scenes style segment where this other man removes Michael’s mask. 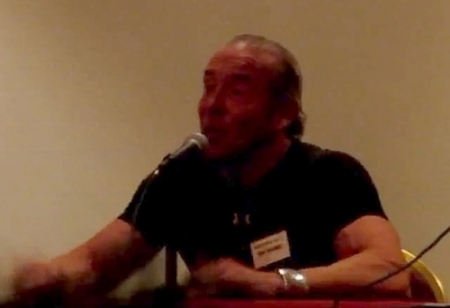 Shanks recalls that Othenin-Girard told him that in Halloween 6 Shanks was to be the revealed face of both Michael Myers and the Man in Black. Shanks compared this storyline to that of the film Raising Cain (1992). In Raising Cain, the same actor plays different characters because he suffers from dissociative identity disorder (a.k.a. multiple personality disorder).

A contract dispute with an actor stalled the production of H6, according to Shanks. Ultimately, the Michael Myers/Man in Black story was taken into a different direction obviously with Halloween: The Curse of Michael Myers. This information would’ve been great for the previous articles on the Hermit and Tim Strode.