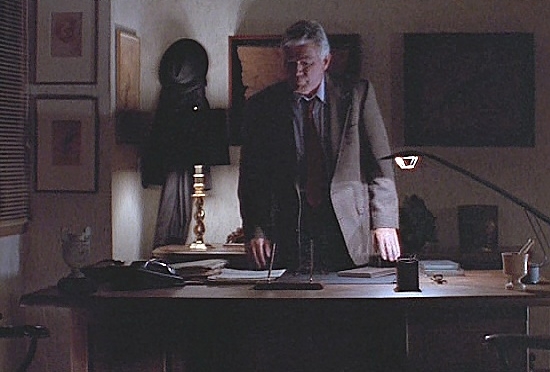 In Halloween: The Curse of Michael Myers (1995), why did Dr. Wynn choose Dr. Loomis as the man to replace him as Michael Myers’ guardian and leader of the cult of Thorn? I’ve watched both the Theatrical Version and Producer’s Cut of the film, but it doesn’t make much sense to me. Part of this has to do with Dr. Loomis’ age. He is obviously much older than Wynn.

In both cuts of the film, Wynn is on the verge of retiring from his position at Smiths Grove Sanitarium. He meets with Loomis, who has already retired from the medical profession, to ask him to come back. Why would Wynn do that? Why choose to be succeeded by a man who retired years ago just as you yourself are going to retire?

During their conversations, Wynn says that Loomis was the first to recognize Michael’s evil and that it’s Loomis’ destiny to take over from Wynn. Why didn’t Wynn approach Loomis about this before? As Loomis himself asks in Wynn’s office, “Why now?” Dr. Wynn never answers that question directly. He instead mentions that the times we live in demand order and that it’s time for another leader for the cult.

The scene in Dr. Wynn’s office makes little sense in the Theatrical version and the Producer’s Cut. In the Theatrical version, Dr. Wynn, dressed in a suit and tie (his Man in Black costume hangs in the background), wants Loomis to join him because they are “at the dawn of a new age.” Loomis is clobbered over the head. As Wynn exits the office, he states that Loomis should be left there on the floor to think about his proposal. However, it’s not clear what Loomis stands to gain from joining Wynn or what his role is supposed to be.

In the Producer’s Cut, Wynn sits at his desk wearing a dark cape and black clothing. He informs Loomis that the leadership of the cult will be passed onto him. Loomis is hit over the head. As Wynn exits the office, he remarks that the office now belongs to Loomis. Was that scene Loomis’ initiation ceremony into the cult? Wynn seemed very confident that Loomis wasn’t seriously hurt, would regain consciousness and simply accept his “destiny.”

As seen in both variations of the office scene, Wynn has a hell of a way to treat the guy who he wants to join or replace him. Hitting an elderly man over the head and letting him fall to the ground can’t be good for his physical well-being. How long does Wynn think that Loomis will be around for? Loomis already walks with a cane and his voice is often barely more than a whisper. Not to mention Loomis suffered a massive stroke at the end of Halloween 5: The Revenge of Michael Myers (1989). Also, if Loomis joined the cult would he be required to wear the Man in Black costume (complete with cowboy boots)? What’s in it for Wynn if Loomis joins or takes over, how does it benefit him?

Within the Theatrical version, Wynn steps back and watches as Michael slaughters the surgeons. That’s the last we see of him –Wynn’s fate is unknown. In the Producer’s Cut, he magically passes the curse of Thorn onto Loomis (why didn’t Wynn do this in his office?). As the film ends, Wynn is laid out on the floor wearing Michael’s coveralls, laughing in a sinister manner.

There is quiet manipulation at work in the outcomes of these two versions of Halloween 6. In both cuts, Michael escapes. He is the silent manipulator. During the conclusion of the Theatrical version, Loomis reenters Smiths Grove and it is implied that something happened to him. We see Michael’s mask on the floor alongside one of the syringes used to attack him, but Michael himself is gone. At the end of the Producer’s Cut, Wynn is unmasked and takes a moment to conclude that Michael has left.

The relationship between Wynn, Loomis and Michael is referred to as a game. In both cuts of the film, Loomis states that, “It’s his game and I know where he wants to play it.” Loomis doesn’t state whose game he thinks it is. However, since Loomis goes directly to Wynn’s office at Smiths Grove, it’s safe to say that he was referring to Wynn. Was Halloween 6 a game between the two doctors – Loomis and Wynn? Was Michael a mere pawn in this game? Did Michael seek to end this game? In contrast to the other sequels in the franchise, Halloween 6 lacked a direct showdown between Michael and Loomis. It seems that Halloween 6 was concerned with the showdown between Loomis and Wynn. What is clear is that Michael escaped the game. He’s gone at the end of both versions of Halloween 6.