For this edition of Halloween Autographs, I’ve reached out to the MMnet community. Fellow member puckface generously provided the two autographs featured here. First up is Sasha Jenson. He starred as Brady in 1988’s Halloween 4: The Return of Michael Myers.

Wasn’t Brady one of the first – if not the first – characters in the Halloween series to actually confront Michael, man to man? The entertaining confrontation between Brady and Myers is depicted in an incredible photo that is signed by Jenson. 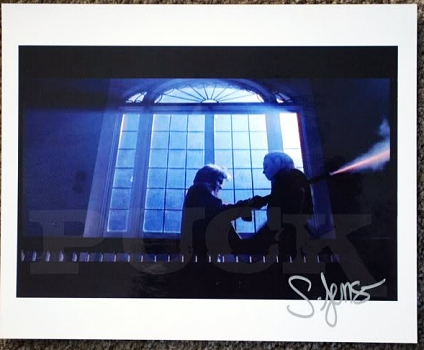 While Brady would eventually co-star in 1993’s Dazed and Confused, his career didn’t exactly take off. Maybe it was his personal decision to step back from the business (although I suspect that Jenson’s eyebrows couldn’t have helped him much in landing any major roles). Dazed and Confused also starred Matthew McConaughey, Milla Jovovich and Ben Affleck.

Next up, is Daeg Faerch. Daeg did an admirable job portraying Michael Myers at age 10 in Rob Zombie’s Halloween (2007). Described as a rather cool kid, Daeg’s performance was noteworthy in that film. 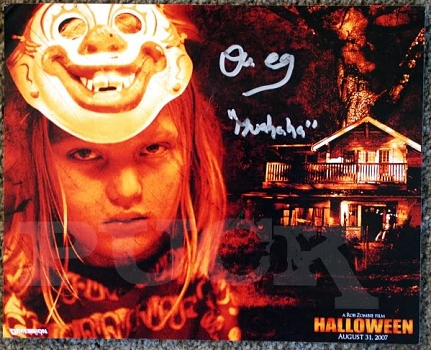 Daeg is growing up before our eyes. More than likely, his signature will also change. So, obviously, these early Daeg autographs will be a rarity in the future. Let’s hope he continues on in the movie business unlike some other people I know.

Big thanks to puckface (a.k.a. Scott) for sharing some of his autograph collection with us. Check out Scott’s Hannibal restraint mask and hand-carved Predator helmet.